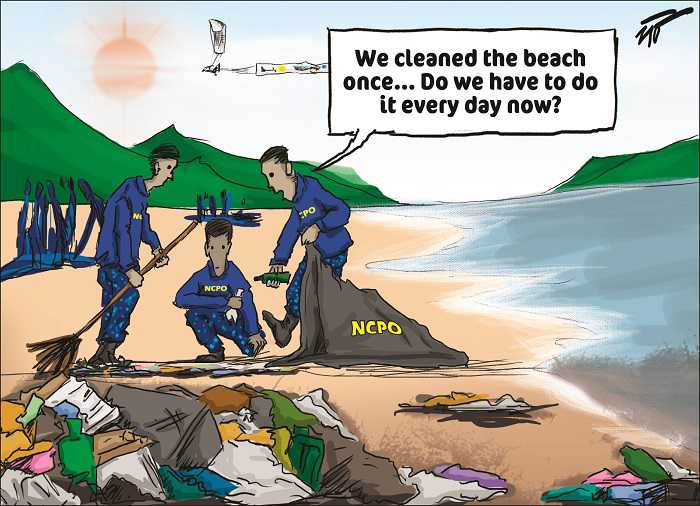 PHUKET: The recent lifting of the ban on tourists bringing umbrellas onto island beaches is a step in the right direction, one the Phuket Gazette hopes will eventually lead to a comprehensive and sustainable solution that meets tourists’ needs while continuing to protect our beaches from encroachment.

However, Ma-ann Samran, president of the Cherng Talay Tambon Administration Organization (OrBorTor), made it clear that only the acquisition of umbrellas from operators working off nearby private land would be allowed on Surin and other beaches under his jurisdiction. The pragmatically creative compromise thus maintains the lofty new directive that all public beaches are to remain free of private commerce in all forms.

There is no question that a complete overhaul of beach business activity in Phuket was long overdue after decades of systemic corruption created a system of extorting billions of baht for the rights to ply goods and services on the sands. Additionally, the system left many island beaches in a woeful state, with some areas more closely resembling seaside flea markets than what is typically depicted in travel brochures.

The National Council for Peace and Order clearly knew what was at stake when it cleared the beaches, and then drew an inviolable line in the sand banning any commercial re-colonization.

If the ban can be enforced long-term, not only could it make beach tourism here more sustainable, but could also bring it more in line with other upscale destinations around the globe.

However, there are other practical considerations that need to be addressed in the short term. One of the benefits of the “old” system was that people working on the beaches played key roles in keeping the sands clean and safe.

As an important way to attract customers, it was in their best interests to keep their “patches” of the beaches free of debris. Tourists from most developed nations are conditioned to clean up after themselves after a day at the beach. Sadly, however, this is not the case with many domestic tourists.

The Navy, which operates a base in the heart of Songkhla Town, need only look at the state of the popular Samila Beach there to see just how disgracefully dirty a popular beach can become when locals use it for picnics, then pull their mats out from under the byproducts of the feast, leaving all their plastic and Styrofoam garbage on the sand.

Just as importantly, the beach vendors in Phuket also kept an eye on their clients and their belongings, allowing them to go for a swim without having to worry about having their valuables stolen.

They also warned tourists of other threats, such as the dangers of rip currents. Now that they are banned from our beaches, who will step in to play these important roles?