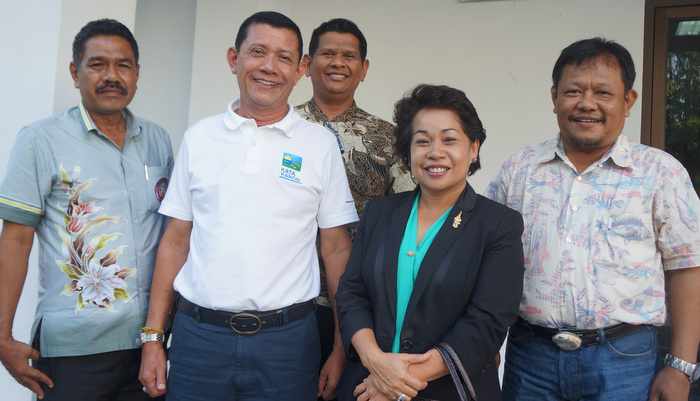 PHUKET: Top officials from Phuket’s most popular beach towns gathered at Provincial Hall today to sift through the sands and dream up a new look for the island’s coastline.

“We will clear all beach chairs, umbrellas and establishments that do not meet provincial standards from all of Phuket’s beaches,” said Phuket Vice Governor Chamroen Tipayapongtada, who spearheaded the meeting.

Provincial standards are expected to be established, along with a full strategy for implementing them, by the end of next month.

Some concessions were made immediately by the regional power houses.

“A couple of days ago, I met with the Patong beach chair club leader. The operators have agreed to leave two meters of space on each side of their section of chairs, which means that the end of one operator’s section must be at least four meters away from the next operator’s section,” said Ms Chalermluck.

“Additionally, beach masseuses must only use a sheet on the sand when giving massages, and they must fold the sheet up when they are done,” Ms Chalermluck said. “This is a beach massage. If customers want higher-quality massages, there are many shops in Patong.”

“Whatever the new measures are, we will enforce them in full,” Mr Tawee said.

Mr Ma-ann, in charge of Surin Beach, which was swept clean of many establishments encroaching on the sands (story here), gloated about the beach’s new look.

“It took so long for Surin Beach to be as clean as it is at this moment. At this stage, I am not considering allowing chairs or umbrellas back on the beach,” Mr Ma-ann said.

“I love seeing Surin Beach so clean, and I believe most people love it too.”

The structures and vendors removed from Surin Beach were illegally encroaching beyond the walkway. However, the “legal” establishments to the east of the walkway were not under threat of being removed, Mr Ma-ann told the Gazette on June 18 (story here).

The legality of the structures and businesses to the east of the walkway has yet to be confirmed, and the issue was not raised by Vice Governor Chamroen in the meeting today.

“This was a good meeting. We have a clearer picture and a road map that we can use to plan, organize and manage Phuket’s beaches in such a way that they are clean, and that local people can still earn a living from them,” V/Gov Chamroen said.

A date was not given for the next beach meeting, which will be held by a provincial committee and chaired by V/Gov Chamroen.

Ronaldo misfires as Portugal and Ghana bow out