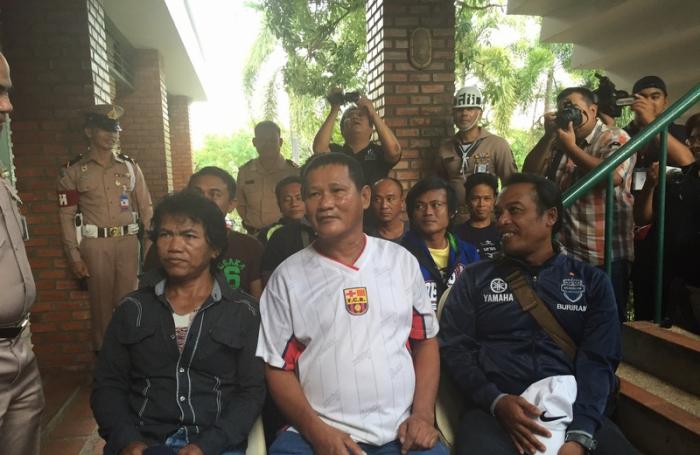 PHUKET: The Royal Thai Navy and the Illegal Fishing Suppression unit are trying to locate the owners of seven fishing vessels that faked nationality documents to enter Phuket in November last year.

The vessels, with 10 crew members on board, were denied entry when officials checked the ownership documents stating Bolivian ownership that turned out to be forged (story here).

“No one has appeared to claim ownership of these boats. The problem is that there are 10 crew members who are stuck here without any resources,” said Radm Wannapol.

All ten – nine Indonesians and one Filipino – said they are owed between five to 19 months of wages, and earn about 12,000 baht a month on average.

“They have legal documentation for working in Thailand. We have not detained them; they just do not have the money to fly back home. However, they’re also important witnesses who can help us to catch whoever is behind the operation,” said Radm Wannapol.

Officials have provided food and temporary accommodation to the crew members while they are trying to locate the owners.

“We know that the owners are Taiwanese, possibly with Thai shareholders. We know their names and some personal details, but we are collecting more evidence to be sure,” he added.

The boat owners are not only wanted for faking nationality, but for illegally trying to sell fish in Phuket.

“All they have is fishing permission from Myanmar, so they have to port and sell the fish there,” said Radm Wannpol.

“The crew members say this is not the first time they have been to Phuket – each boat has been here at least three times before. Therefore, we have to take strong action against this,” he added.

Radm Wannapol said that this will impact the future of IUU fishing in Thailand.

“We are doing our best to improve the international ranking of Thailand by getting rid of illegal fishing. If the fish exported overseas are acquired through illegal means, it will have dire consequences in the international community. We want to make an example of this case and pursue it relentlessly until we get positive results,” said Radm Wannpol.

One of the crew members, named Reynaldo Prado Meneses, 65, told the Phuket Gazette that they are not victims of human trafficking, but are in dire circumstances because of lack of money.

“I trust the Thai government and believe that they can help us. I have been working for more than seven months without receiving any payment. I am happy to cooperate and answer all their questions, but we are all innocent and legal crew members who have worked hard for their money. We just want our money to go back home,” he said.

Two deaths on day 4 of “Seven Days of Danger’