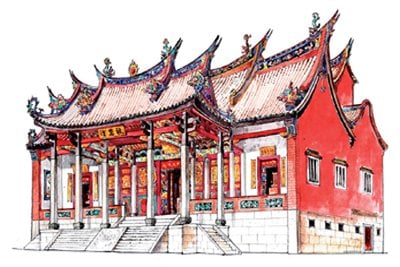 PHUKET: Work is currently underway on a new cultural museum and shrine that will showcase the way of life and traditions of Phuket’s ethnic Hainanese community, which date back to Phuket’s tin mining days.

Former Prime Minister Chuan Leekpai was in Phuket last week to preside over a pillar-laying ceremony at Thni Kong Thua Shrine in Wichit.

Built over a century ago, the original structure is one of the oldest shrines on the island and is badly in need of replacement. The work follows a decision by the shrine committee to erect a new shrine as well as refurbish and preserve its predecessor as a museum.

“The original shrine was built more than 100 years ago at Baan Leam Chan, in Wichit Village 2. The building was really old and started to suffer damage, so the shrine committee agreed to build a new structure in the same area to replace the old one,” said Mrs Benjamas.

The new building, two storeys high, will be built in the traditional and highly ornate Hainanese style. Malaysian architect Tan Yeow Wooi, an expert in Chinese shrine design, has drawn up the plans. The entire project is funded at 40 million baht.

The old shrine will be moved 40 meters away from the new one and covered with a roof structure to protect it from the elements.

“We want to protect and preserve the original shrine as an archaeological site. This shrine used to be the place where all “Pee Tao Jang” people (tin miners with long braided hair) came to congregate,” Mrs Benjamas explained.

“They needed a place and materials to perform their religious ceremonies, so they sent a representative back to China. He returned with holy incense, wooden sculptures of Chinese gods and other spiritual objects they needed. The original shrine was very small,” she said.

Over time the shrine grew along with the Pee Tao Jang community.

“When it became too small, the Pee Tao Jang commuity members donated money for expansion projects and a new shrine was built on adjacent land belonging to Mr Lorbie (Sae-lor) and Mrs Kuad, both ancestors of the Thepabutr family. The Baan Laem Chan community, especially the Thepabutr family, took good care of the shrine in the past and continue to do so in the present,” Mrs Benjamas said.

Phuket Sports: A gem of a fun regatta