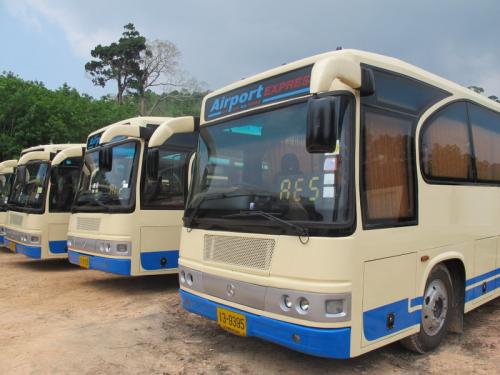 PHUKET Governor Maitri Inthusut confirmed to the Phuket Gazette that he will approve the long-awaited bus service to start serving tourists arriving at Phuket International Airport.

The new bus service – to launch with six buses departing the airport to provide a “hop on, hop off” service to the major tourist beaches down the west coast – has one final hurdle to clear: it must be approved at a provincial transportation committee meeting on Tuesday.

“I will not be here for the meeting, so I will have Vice Governor Chamroen Tipayapongtada chair the meeting and confirm the launch date with the operator – and approve the service,” Governor Maitri said.

The governor said he had been assured the island’s taxi drivers, long known for their intolerance of any interference in their lucrative trade, will not be affected by the new bus service, to be called the Phuket Airport Bus Express.

“This will not affect the taxi drivers. It is a different service that appeals to a different type of tourist. People will still use the taxis to go to and from the airport,” Governor Maitri said.

“I support this new service. It is a public necessity. We need to have it,” he added.

Phuket Land Transportation Office (PLTO) chief Teerayut Prasertpol confirmed, “Once the bus service has been approved, the PLTO can issue the appropriate license within a week.”

The operator of the new bus service told the Gazette, “As soon as we have the permits, we are ready to roll.”

However, the Kata-Karon Taxi and Tuk-tuk Driver’s Co-operative, the same group of drivers who staged a blockade of the Karon beach road in January, had one simple message for the new bus operator: “Just try it.”

The person who said this asked not to be named, and told the Gazette, “I do not believe that local taxi and tuk-tuk drivers will be okay with this. The bus will take money from us. We are just local people trying to make ends meet day by day.”

“I don’t know about other taxi drivers, but our 500 members do not have any problems with it,” he said.

“I think we are looking at this in different ways. Of course taxi drivers will be affected, but the government has their reasons for developing public transport in order to give people another option.

“Our drivers understand that. Some other drivers may not,” Mr Settasak said.

At the airport, one operator who owns 15 taxis voiced his support for the new bus service – albeit on the condition the Gazette did not publicly disclose his name.

“The bus will be another option for people to use. Other provinces have similar bus services, and I will be glad to see Phuket have one, too,” he said.

“We have to look at the immediate future for Phuket. This is good for people and good for Phuket’s image,” he added.

Although the contract to run the bus service is a government concession – meaning that all information relating to the terms of service and the company that will provide the service must be publicly available – Mr Teerayut asked the Gazette not to name the man behind the new service until it is launched.

He declined to give a formal reason why he requested the information be withheld.

Regardless, the new bus service operator himself agreed to reveal that he has been running taxis at Phuket Airport for years, and that his taxi associates at the airport had no problem with him launching the new service.

“My fellow taxi drivers understand the bus service is needed and are happy to see Phuket progress,” he said.

The company has spent 6 million baht on refitting the buses to make sure they adhere to the standards required and have the appropriate luggage space.

“They have also been fitted with CCTV cameras in case there are any disturbances on the bus,” the operator explained.

“We have conducted several test runs, driving the bus from the airport to the terminus in Kata. Consequently, we have learned that in order to make the service viable in the long run, we will have to charge 150 baht for passengers travelling the entire route.

“Fares for passengers disembarking earlier along the route will be scaled down accordingly,” he added.

“The website is currently in Thai with some English. We are still developing the English-language web pages. They should be available soon.”

This article appears in more detail in the current (March 16-22) issue of the Phuket Gazette, on newsstands throughout the island now. Digital subscribers may download the full issue, this week and every week, here.