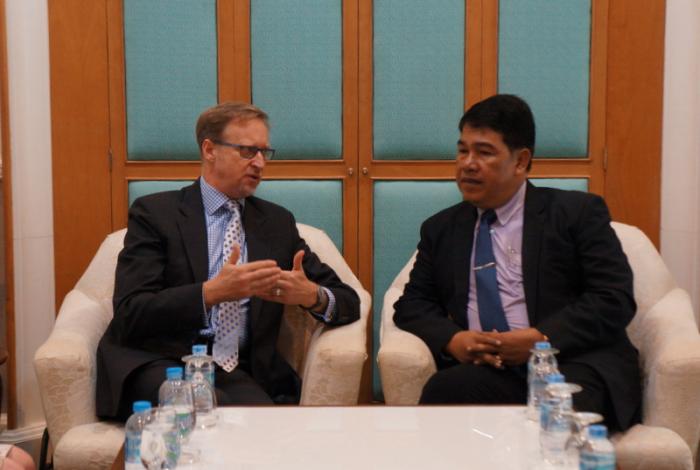 The ambassador met with Phuket Vice Governor Chokdee Amornwat this morning at Phuket Provincial Hall. At the meeting with provincial officials, Ambassador Davidson highlighted concerns over public safety in Phuket, raising his worries over the island’s jet-ski operators, taxi mafia, the lack of public transportation and the ongoing issues over the legality of real estate purchases.

The ambassador also asked officials if they had any concerns over any policies since he took up his post in June.

In 2013, the British, Canadian and Dutch Ambassadors to Thailand plainly described their chief concerns about the scamming and cheating plaguing the tourism industry (story here).

“My biggest concern is the same as that of other ambassadors here last November,” Ambassador Davidson said during this morning’s meeting. “A couple of issues they discussed were about Phuket’s development, the state of tourism, taxi drivers and jet-skis. I’m really delighted that [the scams] have disappeared from this province to an extent. Thank you very much for working on it.”

“We would like to see some of that progress continue – all of the tours and boat operators to be maintained properly in this aspect.”

V/Gov Chokkdee said Phuket officials had cracked down on illegal taxis, forced them to come up to compliance and are enforcing metered rates. He also said the provincial government will, of course, push to expand public transportation on the island.

“Now we only have two means of public transportation from the airport, Phuket Town and one via Patong to Kata. We want to have more public vehicles that people can use in order to help out traffic. We have been meeting about that and hope to see results soon,” said V/Gov Chokdee.

Ambassador Davidson also presented the vice governor with information about Thai-UK scholarships, as he wanted to see more students outside of Bangkok get involved. V/Gov Chokdee promised to pass on the information to the Prince of Songkla University and Phuket Rajabhat University.

Ambassador Davidson told V/Gov Chokdee that the embassy is interested in joining in or observing the provincial tsunami drill, which is planed for December.

Ambassador Davidson, along with embassy staff, visited the Phuket Gazette after the meeting, as well touring Phuket International Airport’s new terminal with a security expert.