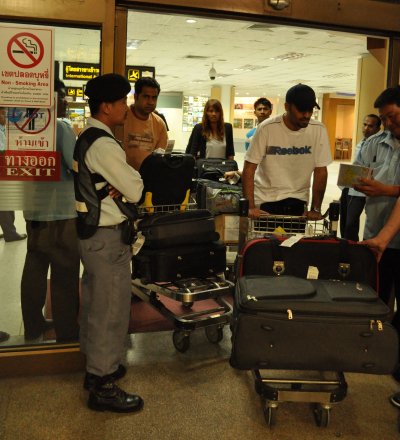 MAI KHAO, PHUKET: While occupancy rates on the island continue to plummet, Airports of Thailand (AoT) has agreed to allow 60 more taxis and minivans to operate out of Phuket International Airport.

A two-hour meeting was held at the airport today to work out a compromise between two rival concessionaires offering door-to-door limousine and minivan services from concession booths inside the arrivals hall.

The meeting followed a gathering on February 4 to hear complaints from long-time airport concessionaire Phuket Airport Limousine and Business Cooperative Ltd (PBC) after the co-op learned that rival concessionaire Phuket Mai Khao Sakoo had been awarded the right to operate 30 more limousines at the airport.

In the previous meeting, no agreement could be reached and the AoT asked for more time to study the issue and find a solution acceptable to both sides.

Today, some four months later, both sides have finally agreed to a compromise that will allow the PBC to operate 30 more minivans and for Phuket Mai Khao Sakoo to run the 30 taxis, as previously agreed.

The move will raise the number of vehicles run by Phuket Mai Khao Sakoo to 110, with 50 minivans and 60 taxis.

The number of vehicles operated under the PBC will be raised to 180, with 150 taxis and 30 new minivans.

The new vehicles will be allowed to operate without an increase in concession fees until the two groups’ current concession contracts expire.