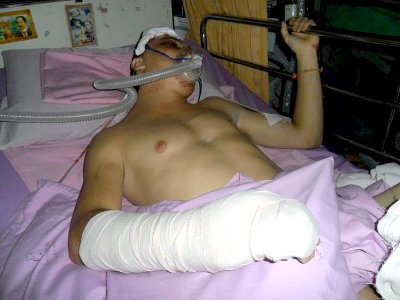 PHUKET: An international medical company has made a pledge to find the “best treatment” for an Australian muay thai fighter whose father fears was not in a motorbike accident as Phuket police believe, but was beaten and left for dead.

Daniel Ketley, 22, was rushed to hospital in the early hours of June 8 after he was found in Nai Harn with several serious injuries.

The last thing he remembers from the night was seeing a petrol station in the Soi Sai Yuan area. He believes he may have been attacked while stopping for fuel.

Mr Ketley has since been diagnosed as suffering a fractured skull, hemorrhaging and compression on the brain, a shattered eye socket, a broken jaw, missing teeth, fractured vertebra and nerve damage to his neck and shoulder, leaving his right arm immobile.

Lotus Medical International, a UK and Thailand-based medical company, today said in a Facebook post that the immediate concern was getting Mr Ketley into a “high-quality private hospital in this critical phase.”

The Facebook group raising funds for the medical treatment and generating support for Mr Ketley was started on Monday, and as of today has already raised 121,000 baht.

However, the muay thai fighter’s father, Steve, told Australian news source Ninemsn that the family and a family doctor believe that Mr Ketley was savagely beaten and then robbed of his wallet and phone.

Mr Ketley’s parents were suspicious of the report that their son had been in a motorbike accident, as his clothes were not dirty or ripped and the bike had no scrapes, although the front of the bike was damaged and the mirrors were broken.

The fighter’s father even admitted that he wished the incident was a motorbike crash.

“I would like to think it was a motorbike accident because we live here and this is our home,” he said.

“It changes your perspective on a place.”

Mr Ketley has lived in Phuket with his parents for the past three years and is a full-time muay thai boxer training with the Sumalee Boxing Gym in Thalang.

According to the gym’s website, Mr Ketley started muay thai when he was 17 years old and then moved to Northeast Thailand to continue his training when he was 18.

In 2009, Mr Ketley returned to Phuket and was sponsored by Tiger Muay Thai. During his time there, he won eight of his nine fights.

In 2010, he won the WKBF Australian Lightweight title against Chris Kearney.

After a brief stint fighting for Phuket Top Team, he moved to his current gym.

To make donations to help with the costly medical treatments necessary to attempt to get Mr Ketley back on his feet, visit the Daniel Ketley Fund Facebook page (click here).

Phuket teenager hangs self after break-up with girlfriend