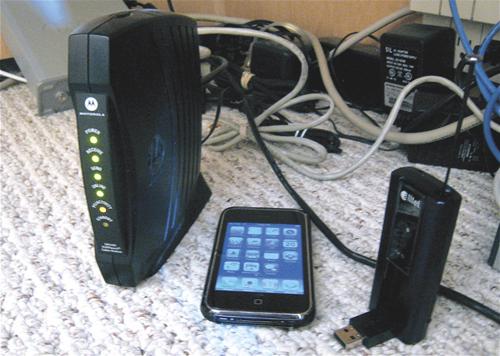 PHUKET: As many of you know, I am in the process of moving. Sometime in the next month or so, I’ll be moving from a Patong townhouse – where I’ve lived for the past 12 years – to a modest housing development in Kathu, near Loch Palm Golf Course.

For most of you, moving is a massive pain. For people who are dependent on having fast, reliable internet, 24 / 7, moving is not only a massive pain, it’s frightening. When my internet goes down, I might as well go fishing.

This week, I’m going to start with a general overview of which internet products are available, and how much they cost. Next week, I’ll try to hone in on what kind of service(s) most people need – 3G, ADSL, Fiber, WiFi and more exotic options – and how they fit together. In subsequent weeks I’ll tell you about the options I’ve chosen, and try to give you hints about what might be right in your situation.

Here are the main internet vendors in Phuket, and what they have to offer:

TOT has ADSL lines, and in some places Fiber 2U. The standard TOT ADSL package is listed at 10 Mbps, and costs 590 baht per month. You can run that up to a nominal 15 Mbps at 1,290 baht or 20 Mbps at 1,890 baht in most locations. TOT also had the first Fiber Optic lines commercially available in Phuket. The “Infinite Basic Fiber 2U” package runs 1,500 baht per month for nominal 10 Mbps, up to 2,500 baht for 20 Mbps. The “Infinite Advance Fiber 2U” package runs 4,500 baht for 10 Mbps, up to 7,500 baht for 20 Mbps. I don’t know of anybody who’s paid for and tested a faster Fiber 2U connection in Phuket – although they are available in some parts of Bangkok.

TOT also has just started selling a 3G (actually, HSPA+) wireless internet service in Phuket, but details are sketchy. The TOT network is the same one as AIS.

TOT is unique on the island in offering something they call Winet or, sometimes, AirMax. It’s an odd service that runs without a wire up to your house, but there’s a box that TOT puts on the side of your house that converts the wireless connection into something that works exactly like an ADSL connection. It’s a bit complicated, conceptually, but the bottom line is that you can get ADSL-like service without running a phone line to your house, as long as you’re close enough to a particular kind of TOT antenna: that’s very important for people who live ‘out in the boonies’, and for those who live in housing estates that don’t allow you to run wires to your house. AirMax is 599 baht per month. I wrote about TOT AirMax in the August 21, 2011 Live Wire.

CAT’s Fiber Optic network is now widely available on the island; it’s been sitting in a marketing closet for quite a while. The CAT “ON Net” service runs from 1,500 baht per month for a nominal 20 Mbps line, up to 3,500 baht for a 40 Mbps line. Their Gold and Gold Plus services are considerably more expensive, starting at 4,200 baht per month for a 30 Mbps line. We haven’t had any real-world test scores submitted for the Gold or Gold Plus lines.

CAT also has 3G (HSPA+) service. It’s the same network used by TrueMove, and by DTAC. As of this week, the CAT 3G internet runs 499 baht per month – considerably less than TrueMove and DTAC, for essentially the same product.

3BB is the only landline vendor who hasn’t gone to Fiber, or to 3G. Yet. 3BB lines are everywhere (they piggy-backed on the old TT&T wired network). Service starts at 590 baht per month for the nominal 10 Mbps line, going up to 2,290 baht for 20 Mbps.

True offers standard ADSL, which is arguably the best-regarded garden variety ADSL service on the island. Price starts at 599 baht per month for a nominal 10 Mbps line, up to 1,399 baht for 16 Mbps. I’ve been told by True staff here in Phuket that they also have a VDSL service available in some locations: VDSL is a lot like ADSL, except it’s faster, and should be more reliable (operative term: “should”). The 20 Mbps VDSL service lists for 2,299 baht per month.

True also has a DOCSIS network set up that runs to many high volume areas on the island. (I have DOCSIS lines installed at the Sandwich Shoppes in both Patong and Chalong, if you want to try them.) DOCSIS is another odd technology that uses a cable that’s very similar to Cable TV – shielded coax. I wrote about the DOCSIS technology in the July 7, 2011 Live Wire, Right now, DOCSIS service runs 599 baht per month for 10 Mbps, just like ADSL, going up to 1,299 baht for nominal 20 Mbps. There’s also a bonus for the faster DOCSIS lines where you get a very stunted line-up of television stations over the same cable, free, when you subscribe to DOCSIS internet.

True is well known as the parent company of TrueMove, which offers the TrueMove-H 3G (actually, HSPA+) service all over the island. TrueMove-H uses the same equipment as the CAT 3G network, but it’s more expensive: 899 baht per month for up to 5GB of monthly data. If you exceed the 5 GB cap, your service is knocked down to a much slower speed for the rest of the month. For comparison, if you download a typical medium definition TV show, expect to use up to 1 GB per hour of TV show.

By the way, if you go looking for these prices on the internet, you probably won’t find them. The ISPs in Phuket are infamous for not using the internet, like a cobbler with no shoes, or a phone salesman with a Blackberry 850. You can find the latest movie schedules online, you can find detailed instructions for building a Plutonium enrichment plant, or creating a liquid that’s supercooled to below absolute zero. But heaven help you if you need to find out what internet packages are available and how much they cost.

I came up with all of these numbers by schlepping to each company, in turn, picking up their latest brochures, and chatting with the clerks. Next week I’ll try to sort through the alphabet soup and explain what most people need to run their home PCs, Macs, phones, iPads, and the like. It’s complicated.

We’re running informal computer clinic roundtables every Sunday morning at Sandwich Shoppe Chalong, located 1 km north of Chalong Circle on Chao Fah East Road. If you have a Windows problem that needs to be solved, or a question about internet service in Phuket, drop by and ask one of the assembled gurus. Sponsored by the Phuket Gazette and Khun Woody’s Sandwich Shoppes.