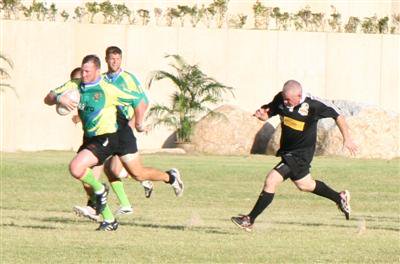 PHUKET: Scoring three tries in the first half, the Kriel Roosters from South Africa trounced the Moorabbin Rams from Australia 31-0 in the final of the 12th Overgaard Phuket International Rugby 10s played at Karon Stadium yesterday.

The South Africans were clearly the fresher side, making the most of their speed advantage by quickly passing the ball wide and using their pace down the wings, or simply scooting through gaps left in the tiring Rams sliding defense.

Despite the scoreline, the match was much tighter in the second half, with both teams working hard in the rucks and mauls. One Roosters try disallowed as the Rams defense managed to hold the ball up over the line.

The Rams may have had good reason for being tired: the squad had just won the Coffin Dodgers competition for players aged 35 and over for the second successive year.

Teams from across the world traveled to Phuket for the eagerly anticipated tournament, the brainchild of local rugby player Pat Cotter.

As well as highly entertaining rugby, the tournament brought with it a huge influx of visitors, mainly staying in nearby Patong. These provided a much-needed boost to Phuket’s tourism-based economy as the island enters the low season.

The action got underway on Friday with the Coffin Dodgers competition. The highlight of the day was the local derby between the Phuket Viagrabonds and the Bangkok Bangers with the Weasel Cup at stake.

The Bangers have won the “golden oldies” trophy for the past three years, but this time it was the Viagrabonds who emerged victorious, winning 19-14, courtesy of three first-half tries.

The Viagrabonds went on to reach the semi-finals of the Cup competition.

There was also an under-15s match between the Phuket Lomas and BIS.

Last year BIS won this fixture 5-0, but this year the roles reversed as the Lomas won 19-5.