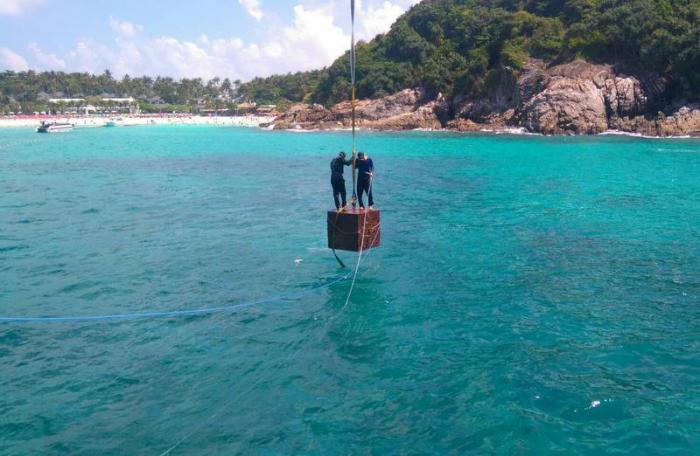 PHUKET: Fifteen new buoys and sets of artificial coral were installed at Koh Racha yesterday, following the allocation and approval of a 300,000 baht budget for environmental preservation by the Marine and Coastal Resources Conservation Department (DMCR).

While recent incidents have spurred officials into action, the issue is long-standing. Last year, a diver recorded a video of a boat found anchored on coral, leading to the arrest of the boat owner by DMCR officials (story here).

“Racha has been facing too much harm – it’s time to protect and restore our natural environment. We are doing our duty in accordance with the orders of Princess Sirivannavari Nariratana and Princess Sirindhorn, to restore and protect marine life from both natural and man-made damage,” said Suchat Rattanaruengsri, head of DMCR Region 6.

The buoys were set up at two spots on Racha Island, namely Plub Pla Bay and Siam Bay.

“Up to three boats can be tied to a single buoy, and with an average of 40 boats entering Koh Racha per day, 15 sets are more than enough,” said Mr Suchat.

“We hope these buoys will stop people from anchoring on coral. However, if anyone is found doing so, he will face harsh penalties,” he added.

“The aim of installing artificial reefs is to revive coral life that is endangered by both natural and man-made causes,” said DMCR Director Paitoon Panchaiyaphum.

“We have also arranged for divers to collect damaged and broken coral and place it on the reef for further breeding. We have practiced this in the past as well, and it has shown improved results in the growth of new coral. It is also beneficial for other varieties of marine life,” he added.

Officials have requested tourist boats to avoid the area for the next few days while ‘repairs and installation work’ is ongoing.

Phuket donates by the truck-load