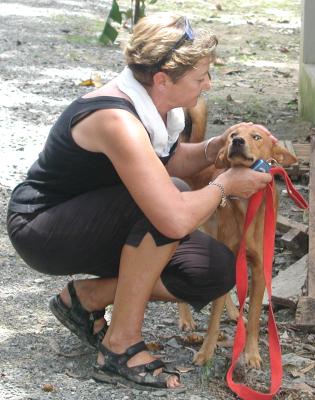 PHUKET CITY: In a judgment worthy of Solomon, the Chief of the Phuket Provincial Livestock Department (PPLO) today defused a nasty dispute over custodianship of a dog being held at the infamous Middle Road Dog Pound.

His solution: the dog should decide.

Trouble erupted at the pound on Tuesday night when Margot Homburg Park of the Soi Dog Foundation attempted to rescue the animal from the pound in order to place him with a new owner.

The dog – a no-name Thai ridgeback who for the purposes of this tale will be called Daeng (because he’s red) – had taken a shine to the animal activist on previous visits, so Mrs Homburg Park placed a picture of the dog on her website and in short order secured a new owner.

Mrs Homburg Park explained to the Gazette, “I wanted to find a home for this dog because he would not survive in the pound. He used to live with people near here.

“I was worried because the dog was not eating; he was very thin. He could have been dead in a couple of weeks. So I found him a new owner.”

So far so good, but no further. K. Waew, a worker at the pound, was not keen for Mrs Homburg Park to take Daeng; she was looking after the dog for its original owner, she said stoutly.

Words alone were apparently not enough to deter Mrs Homburg Park, who climbed over the fence in an attempt to grab the dog. K.Waew and a couple of colleagues, outraged at this invasion of their fiefdom, drove the activist off with sticks and stones.

K. Waew told the Gazette, “I’m responsible for looking after this dog on behalf of his owners – they came here three weeks ago to visit him. The door was locked but [Mrs Homburg Park and a friend] tried to come in. They climbed the fence, so our staff hit them to protect the dog.”

No bones were broken, but Mrs Homburg Park called the police to lodge a complaint of assault.

Into this potentially explosive situation stepped the wise Chief of the PPLO, Sunart Wongchawalit.

This morning, he decreed that the two opponents stand there while Daeng was released from his cage.

“In this case,” he told the combatants, “whoever the dog goes to, gets to own him.”

Daeng wasn’t having any of it. Once released, he trotted off in the opposite direction, away from everyone.

After further discussion, K. Sunart made his final decision: Mrs Homburg Park could take the dog away, though on condition that if the original owners, K. Waew’s friends, wanted him returned into their tender care, she would give him up without demur.

Mrs Homburg Park said this evening, “I know I was very emotional about it, but I honestly think something good will come out of this.”