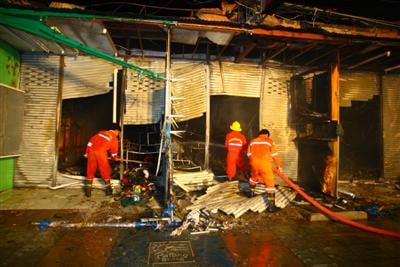 Police believe the fire was started deliberately as it follows a number of arson attacks on the center, as well as the mafia-style murder of center heiress Komkai Kositoon in July last year.

Duty Officer Jongsrame Preecha of Kathu Police said, “This is the fifth recorded case of arson at the Jintana Center. Last year there were three cases of arson at the center and Miss Komkai was shot dead.”

The blaze, which officials believe was started at different parts of the building, quickly spread through the 200 plus stalls. The center was full of clothes, decorations and other tourist-oriented items that quickly fueled the fast-growing fire. It took firefighters two hours to quell the inferno.

A total of eight fire engines converged on the center, located on the beach road near Loma Park.

The land that the center stands on is highly valuable. To rent a stall there costs between 20,000 and 30,000 baht per month.

There have been a number of similar fires in tourist shops on the beach road in recent years. Firefighters have trouble fighting them because of electric wires that run along the sidewalk, blocking access.

Although police suspect arson, they declined to discuss possible motives or give additional information about the investigation at this time.