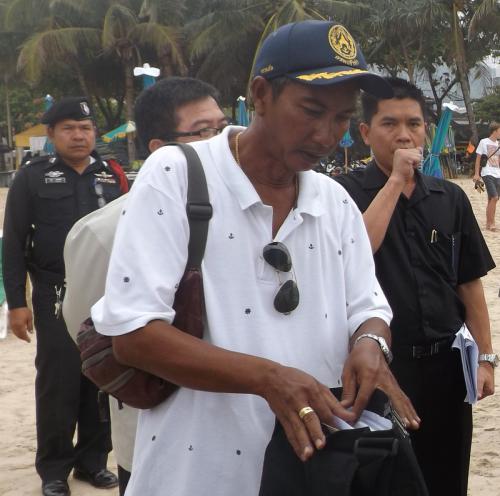 As the island gears up for an increased number of tourists during the high season, the governor made it clear that jet-ski safety was of utmost importance.

“Jet-skiing is a popular activity for tourists in Phuket, and it can also be dangerous,” Gov Maitri said. “It is essential that we manage the conduct of jet-ski operators and jet-ski zoning to ensure that tourists participating in the activity have positive experiences.”

Over 100 of the 350 jet-ski operators on the island have been trained in customer service, foreign languages, first aid and jet-ski instructing, said Deputy President of the Phuket Jet-Ski Club Nucha Petchvimol.

“All of our operators passed the Marine Office Region 5 tests in order to receive their jet-ski operator’s license,” Mr Nucha said.

These are the staffers who will accompany tourists on a jet-ski, he explained.

However, tourists can opt to take a jet-ski out without a licensed operator by signing a contractual agreement, the Jet-ski Rental Agreement and Insurance Policy.

Three years ago, a Russian version of this agreement was drawn up. Before that, it was only available in English and Thai.

“Just about five months ago, we also had the agreement translated into Chinese,” Mr Nucha said.

“The instruction manual is only in English and Thai, but we are planning on translating that into multiple languages too,” he said.

“Operators are now under strict rules to just call the police, rather than trying to handle the situation themselves,” he explained.

In fact, the first case heard by the Phuket Tourist Court was that of 25-year-old jet-ski operator Danaichet Yomjinda, who, attempting to handle a conflict himself, attacked two tourists with a “No swimming” flagpole (story here).

“If any of our members attack a tourist, they will be fired,” Mr Nucha said.

Jet-ski operators receive 20 per cent of the rental fee for the jet-skis they rent, averaging an income of about 1,500 baht per day during the high season, Mr Nucha said.

“We established the pricing for jet-ski rentals based on the cost of fuel, insurance, maintenance and transportation to and from the beach,” Mr Nucha said.

Also on the table this high season is establishing jet-ski zones for the five beaches where operators are allowed to rent the machines: Patong, Kata, Karon, Bang Tao and Koh Naka.

“We will have a meeting to establish zones for jet-skis, boat anchoring, parachute boat rides and swimmers,” said Nachapong Pranit of the Phuket Marine Office.

The zones, designed to keep people safe, are expected to be set in about two weeks, he added.