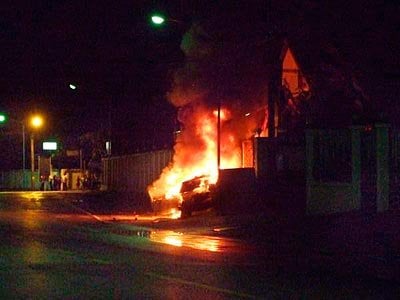 PHUKET: A man trying to flee after a hit-and-run accident on Monday night smashed into a power pole and barely escaped alive after his car was engulfed in flames.

Phuket City Police Superintendent Wanchai Ekpornpit said the driver was a well-known local businessman who was drunk at the time.

According to a Phuket City Police preliminary investigations, the man was driving his Volvo sedan though the Sakdidet Road Junction at about 11:30pm when he crashed into a motorbike ridden by 53-year-old Somnuek Leelanapaporn.

Mr Somneuk suffered only minor injuries, including a cut to his forehead, and was treated at Vachira Phuket Hospital.

Rather than stop after the collision, the driver sped down Soi Sakdidet 1 towards Saphan Hin, but the vehicle crashed into a power pole in front of the Phuket Juvenile Observation and Protection Center.

Onlookers help pulled the driver from the vehicle, which was quickly engulfed in flames.

It took the firefighters about 20 minutes to put out the flames in very windy conditions.

The driver was sent to Vachira Hospital Phuket for treatment of injuries including a wound to his chest, which apparently hit the steering wheel hard when the vehicle slammed into the pole.

Police Superintendent Wanchai said charges to be filed against the driver include ‘damaging public property though negligence’ and ‘leaving the scene of a road accident after causing injury to another’.