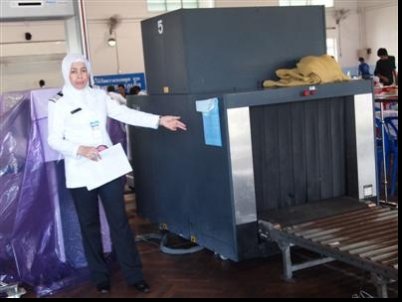 PHUKET: Phuket International Airport is making special preparations to help Thai Muslims from the South as they prepare to embark on this year’s Hajj pilgrimage to Mecca, Saudi Arabia.

This year, pilgrims from Haad Yai and Krabi will join brethren from Phuket to partake in the once-in-a-lifetime spiritual journey.

“We are all ready to facilitate transport of the Hajj pilgrims and their relatives coming to drop them off at the airport. An x-ray machine set up in the multi-purpose building is now ready for use,” Mrs Duangchai explained.

To ease congestion in the departure area of the main terminal, the entire send-off process will take place in and around the multi-purpose building.

“After all the pilgrims are scanned, they will proceed directly to a temporary Customs and Immigration checkpoint area set up in the multi-purpose building. We have also sent up 50 tents for relatives, who can buy food and beverages there,” she said.

Sending them on their way will be Phuket Governor Tri Augkaradacha and Phuket Central Islamic Committee President Bamroong Samphaorat, who will preside over a departure ceremony at the airport on Monday starting at 9am.