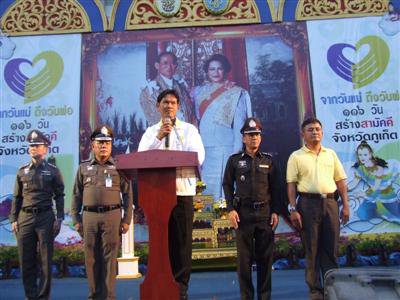 PHUKET CITY: Fearful that foreigners will view Phuket as a “sex tour” destination and center for trade in counterfeit goods, Phuket Governor Preecha Ruangjan has urged police to take a more serious approach in enforcing prostitution and intellectual property laws.

At the monthly meeting of the Provincial Committee for Social Stability held at Phuket Provincial Hall on November 27, Gov Preecha told fellow board members that a recent night tour of Patong Beach convinced him that trade in both sexual services and counterfeit goods was widespread and openly conducted there.

“Phuket is a world-class destination that attracts a great deal of tourists who come here to relax. I don’t want them to get the impression and spread the word around the world that Phuket is a sex tour destination like Pattaya,” he said.

In order to protect Phuket’s reputation, he asked police to do a better job at enforcing anti-prostitution laws – especially in Patong.

On the issue of intellectual property law violations, Gov Preecha told police the trade in counterfeit CDs and other pirated goods was widespread in Kata as well as Patong.

He urged police to take a more proactive approach by arresting violators without waiting for the copyright holders or their authorized representatives to turn up and request enforcement.

The crackdown should begin right away, he told police officers at the meeting.