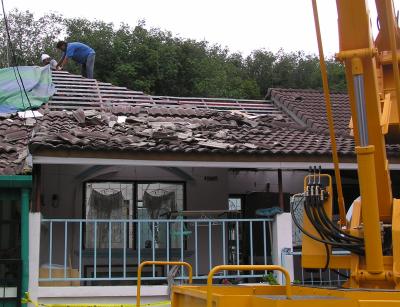 WICHIT: A gas explosion yesterday evening wrecked a house in Jomthong Thani housing estate on Kwang Rd and damaged roofs and interiors in eight other houses nearby. Luckily, no one was killed or injured.

Pol Maj Yongyuth Krongmalai, of Phuket City Police station, told the Gazette that investigating officers believe gas leaked into the single-story house after the pipe from an LPG gas bottle became disconnected from the stove in the kitchen.

The explosion may have been sparked by one of the electric appliances in the house that had been left plugged in, he theorized.

Maj Yongyuth explained that the tenant of the house, 28-year-old Cherl Eung Moon from South Korea, who had moved in just two weeks earlier, was not at home when the explosion happened, at around 5:30 pm.

The blast caused a fire but people living nearby quickly extinguished it. Maj Yonyuth said that no one was injured because most people in the area were still at work.

He added that Mr Moon had come to Phuket to learn Thai and was hoping to open a business here.

Prapai Runglertthanakij, who is the Deputy Director of a resort in Ao Nang, Krabi, but who lives in the house behind Mr Moon’s when she is in Phuket, told the Gazette, “I was at work when my neighbor called me at around 7 pm to tell me about the explosion.

“I rushed home. The kitchen of my house shares a wall with [Mr Moon’s house]. The roof was damaged and all the rooms were full of dust and bits of broken tiles.

“I didn’t sleep last night – I was cleaning up and checking everything in the house. It’s lucky that nothing was damaged apart from the roof.”

She added that local authority workers came this morning to patch the roof with canvas to keep the rain out. Until it is properly fixed, however, she will be staying at the church she attends.

Theeradet Aroonphan, 37, who rents the house alongside Mr Moon’s, was also at work when the blast occurred – he plays in a hotel band. Returning home he found that the roof of his house, too, had been damaged, along with a computer and some sound equipment.

“Now I’ll have to move all my stuff out of the house and stay with my friends in the band for a while,” he said.

Police have contacted the owners of all the damaged houses, and have charged Mr Moon with negligence leading to fire or likely to endanger other people’s lives. The cost of the damage has not yet been estimated.