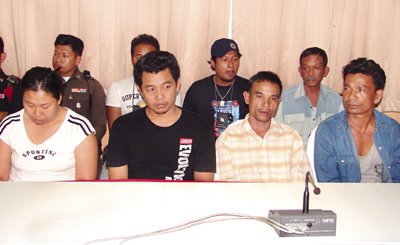 KAMALA: Police have arrested four suspects for the shooting murder of Nongnuch Kongpleum, who was gunned down in front of the The Club restaurant on the main road through Kamala around 7:30 pm Friday.

Lt Col Monsak Suebsuwan, Duty Inspector at Kamala Police Station, told the Gazette that the victim, 42, was the partner of Dutch property developer Harry Tawando, 72, owner of The Club and other properties in Kamala and along Nanai Rd in Patong.

At a police press conference at Kamala Police Station today, police presented the four suspects, all charged with conspiracy to commit murder, before the press.

A fifth suspect, Sinjai Khonghawm, a hired gunman who allegedly pulled the trigger, remains at large.

According to a police press statement, the killing was carried out at the request of Patong-based accountant Juraiwan “Eat” Samit, whose agency had been handling the Dutchman’s business, Baan Naka Resort Co Ltd.

Juraiwan, who held power-of-attorney for the company, felt she stood to lose a great deal after Mr Tawando announced that he was planning to consign the resort business over to K. Nongnuch, with whom Mr Tawando had been living for more than a year.

To prevent the handover, Juraiwan asked her employee Prasit Suwanmanee to find a gunman to kill Nongnuch, said the police statement.

Through middleman Amorn Boonthong, two gunman from Surat Thani were hired to carry out the hit at an agreed price of 110,000 baht; with 50,000 up front and the remainder to be paid after the job was done, police said.

Sinjai and his partner Wichit Numnuan met with Juraiwan and Prasit at a room at the Happy Inn motel near Central Festival on Friday afternoon to plan the attack. They then traveled to The Club so that the assassins could see what their intended victim looked like.

That evening, Prasit called Nongnuch from a phone booth in Kamala, asking her to meet him at The Club to pick up the company stamp of Baan Naka Resort Co Ltd, which had been in the accountant’s possession.

“K. Nongnuch asked an employee to go with her, but the two men followed her on a Honda Dream to the front of the restaurant. The man riding pillion pulled a gun and shot her in the back. They then fled the scene.

“The employee who accompanied her called Mr Tawando. K. Nongnuch was then brought to Patong Hospital where she later died,” Col Monsak added.

Under questioning at Kamala Police Station on Saturday morning, Juraiwan denied any involvement with the killing, but Prasit’s inconsistent reports of his whereabouts on the night of the murder and nervous behavior led police to investigate further.

Police reported that they found on Prasit’s mobile phone a record of the call to Nongnuch that lured her to The Club, and under further questioning Prasit confessed to his role in the murder.

He also told police that he was to going to meet Amorn and Wichai at a waterfall in Surat Thani at 4 pm on Sunday to complete the deal, at which police then arrested the pair.