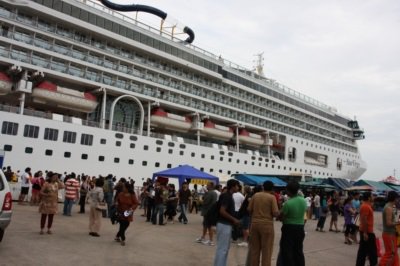 PHUKET: Phuket doctors declared all 1,900 passengers on board the holiday cruise ship Super Star Virgo free of the A(H1N1) influenza virus after the vessel docked at Ao Makham Deep Sea Port on May 4 for a seven-hour stopover.

The passengers, comprising Chinese, Singaporean, Australian, Indian and European nationals, were all checked for flu symptoms before disembarking in the afternoon and again before leaving Phuket in the evening.

The tests were carried out by the ship’s medical staff using thermo imaging scanners. Staff from Vachira Hospital’s department of communicable disease control were present to observe the procedures.

One of the passengers, an Indian national, was quarantined on board the vessel as a precaution after doctors found her to be suffering from an “acute respiratory infection” that was “probably viral”. Following more tests, doctors ascertained that she was not infected with the A(H1N1) virus and the ship was given the all clear.

Phuket Public Health Office chief Dr Pongsawas Ratanasang told the Gazette he was confident the infection had posed no risk to either the passengers or Phuket.

“The Ministry of Public Health plans to purchase at least 10 more thermo scanners for use at sea and air ports around the nation at a cost of 2 million baht per machine. I am not sure when we will receive one,” he said.

Other ports of call on the regular cruise are Penang in Malaysia and Singapore. The vessel is equipped with high-tech medical equipment and includes a sterile isolation room, a surgery and an ICU operated by one doctor and three nurses.

Phuket to the world: Web forum zeros in