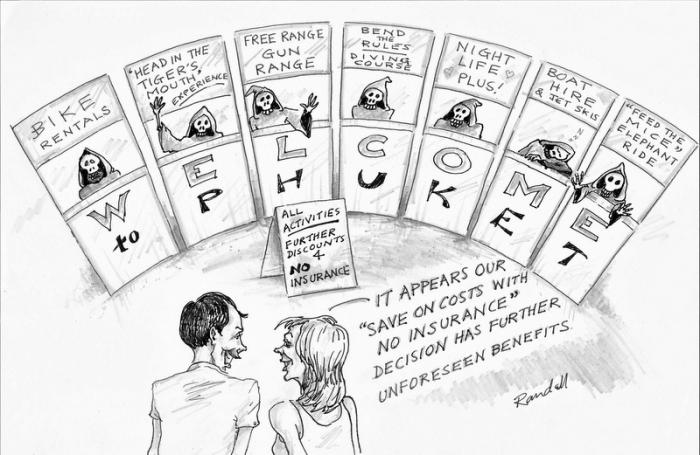 PHUKET: During the current ‘restart’ period, the government should consider establishing a system of mandatory, basic healthcare insurance for visiting foreign tourists who lack it while travelling in the Kingdom.

As outlined in a recent Phuket Gazette article by Dr Tanwa Apornthip (story here), measures need to be established to authenticate Thailand as a genuine ‘world-class’ tourist destination.

Tourist arrival numbers continue to increase despite considerable setbacks. Let us not forget that more than a decade has passed since one of the best-selling T-shirts at roadside souvenir stalls on the island read: “Patong Beach, Phuket, Thailand: 2001 Bomb Alert; 2002 SARS; 2003 Bird Flu; 2004 Tsunami; 2005 Earthquake; 2006 Bangkok Bomb; What’s Next?“

But even after actual terrorist bombings on Phuket last year, the tourism juggernaut continues its relentless expansion into uncharted waters, buoyed in large part by the vast, final frontier that is the mainland Chinese market.

But the ever-growing number of tourist arrivals has resulted in an inevitable increase in the number of accidental injuries and deaths.

That a certain percentage of visitors lack medical coverage, and thus place a burden on the state when they are injured, is equally inevitable. Thailand’s state healthcare system is far from perfect, yet as many readers will be aware, it usually comes through when it is needed most: in times of crisis.

Basic coverage through the Social Security Office is already afforded to foreigners who have worked legally in the Kingdom, at less than 450 baht per month. Some EU states require tourists to show proof of adequate medical insurance prior to entry. There is no reason for Thailand not to do the same.

Those who fail to provide such proof could be issued pro-rated, temporary coverage under the state system based on the length of stay specified by their visa, which should come in at around 450 baht for a one-month stay.

Needless to say, implementing such a system would create an added layer of bureaucracy at Customs and Immigration checkpoints, but since such measures have already been successfully implemented by other countries, Thailand has multiple case studies to review in order to set up such a system as efficiently as possible.

The current regime has already expressed interest in implementing such a system. The sooner it does so, the better it will be for all concerned.

Ministry of Farang Affairs: Girls you bring back home