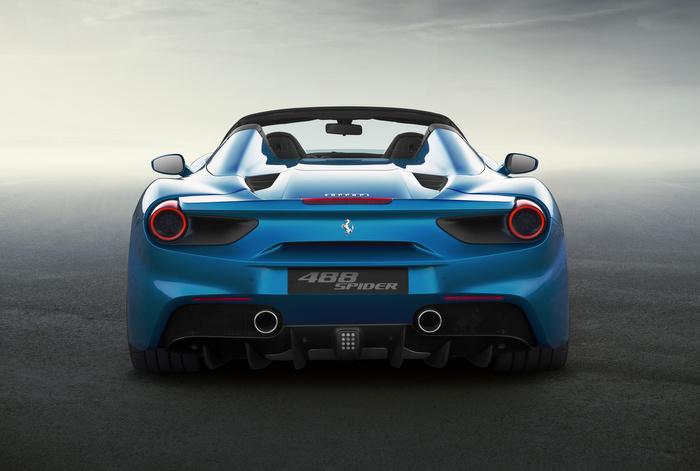 PHUKET: The Ferrari 488 Spider officially made its debut in Phuket – its first appearance in Southeast Asia – following the premiere at the Frankfurt International Motor Show in September.

The Ferrari 488 is the latest chapter in Maranello’s ongoing history of open-top V8 sports cars, a story that started with the targa-top version of the 308 GTB – the immortal 308 GTS – and which ultimately resulted in the full convertible Spider architecture.

The replacement for the Ferrari 458 was showcased in ‘Blu Corsa’ rather than classic Ferrari Red at the JW Marriott Phuket Resort and Spa on Friday. The metallic particles suspended in the Blu Corsa paint have an unusual iridescent effect that is created by the two-layer paintwork.

“We are choosing it for Phuket as we are by the sea. And it also reflects that freedom and lifestyle and leisure [associated with Ferrari],” Dieter Knechtel, Ferrari Far East managing director, told the Phuket Gazette.

The launch represents preparation to enter the model in the five Southeast Asian markets that Ferrari operates in late next year.

“Thailand is a great place to come for Ferrari. We have a very strong partner here [Cavallino Motors Co Ltd] that is very supportive. It’s a market that is gaining in importance. So, for this reason we wanted to give back a little,” Mr Knechtel said.

Simon Inglefield, head of ASEAN – Far East Ferrari, was also at the launch. He explained that there were a number of reasons that Phuket was an ideal location in Thailand to debut the 488.

“In Bangkok, we found the traffic to be quiet heavy, so why not come to a beautiful location like Phuket, which really reflects the car: the blue color with the blue sky you have here and the scenery,” Mr Inglefield said. “That’s also why Phuket was chosen, because of the roads here. It’s the perfect location to test drive the car.”

The Southeast Asian region has proven to be a very volatile market for Ferrari, with strong results in one country, while another goes through a transitional period. However, the last five or six years have seen the Thailand market opening up, confirmed Mr Knechtel.

“We are very happy with Thailand. We are, step-by-step, seeing results in every aspect of the business. The California T [model] is working very well in Thailand. We are confident about any other model coming to Thailand, because the structure [here] is very strong and the customer base is getting stronger,” he explained.

“There are not too many [Ferraris in Phuket], but that is not a reason to do something for them. I think if the situation continues like this, we need to think about building stronger structures in Phuket and other areas within Thailand.”

The popularity of the Ferrari 458 Challenge racing event in Thailand continues to help boost the company’s presence in the Kingdom. Next season will again see the 458s raced. However, the 488 is expected to take the track for the 2017 season, confirmed Mr Knechtel.

The 488 is the most high-performance Spider built by the Prancing Horse and is powered by the coupé’s 3902cc turbo-charged V8, which punches out a maximum of 670 CV with the variable torque management system, guaranteeing smooth, progressive torque delivery in the higher gears.

The car, with blistering acceleration 0 to 100 km/h in three seconds and 0 to 200 km/h in 8.7 seconds, has a throttle response time of just 0.8 seconds, which essentially eliminates the turbo lag typical of this kind of engine.

Though replacement for the Ferrari V12 range is coming soon, Mr Knechtel was unable to confirm or deny whether a similar turbo solution would be put in place for the larger engine.

In line with Ferrari’s tradition and drawing on the harmonics typical of Prancing Horse cars with this kind of architecture, this 8-cylinder has its own absolutely distinctive soundtrack, thanks to exhaust headers with longer, equal-length piping and the flat-plane crankshaft. The sound was crafted to be seductive, but never invasive when the top is dropped, with both volume and clarity increasing in signature Ferrari fashion.

Phuket drug dealer busted with more than B1mn of meth