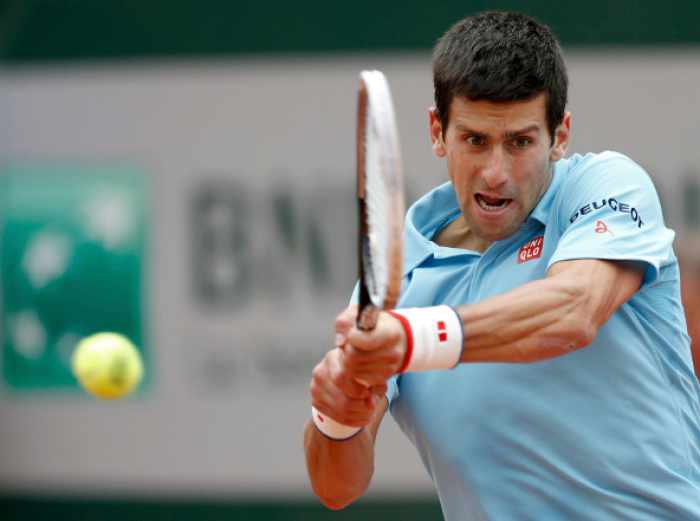 PHUKET: Roger Federer and Novak Djokovic were both put to the test to reach the fourth round of the French Open on Friday while Maria Sharapova continued to blaze through a thinning women’s draw.

Polish third seed Agnieszka Radwanska was knocked out 6-4 6-4 by Croatian Ajla Tomljanovic, becoming the latest victim of a new generation of talent sweeping through the women’s draw.

But seventh seed Sharapova inflicted the first double bagel of the tournament to remain the overwhelming favourite.

“I am relieved and happy to be through to the next round,” said fourth seed Federer, who wasted 17 break points.

Tursunov, the 31st seed, played boldly but needed treatment on a sore groin in the third set and Federer triumphed to set up a meeting with Latvia’s Ernests Gulbis, who is rediscovering his best form after a freefall in the rankings.

Djokovic, one of three men to have beaten eight-times Roland Garros champion Rafa Nadal on clay this season, showed signs of frustration against Cilic.

He seemed in complete control when his 25th-seeded opponent forced a tiebreak that the six-times grand slam winner lost 7-2. Djokovic regained control, however, and sealed victory when Cilic double-faulted.

“Physically I had to work very hard, because he was very aggressive, and I could expect that,” said Djokovic.

“In important moments I held my nerve and, you know, I’m very happy that I went through.”

His next opponent will be local favourite Jo-Wilfried Tsonga, the 13th seed, who defeated Polish 22nd seed Jerzy Janowicz 6-4 6-4 6-3.

In the women’s draw, the top three seeds have all been sent packing following the first-round exit of Chinese Li Na and the second-round elimination of defending champion and world No.1 Serena Williams.

It was the first time since tennis turned professional in 1968 that the top three seeds in the women’s draw have failed to qualify for the fourth round of a grand slam.

“After seeing the two first seeds go out, you kind of feel you can do this too,” said the 21-year-old Tomljanovic, who will next meet Spanish 14th seed Carla Suarez Navarro who ended the run of American teenager Taylor Townsend with a 6-2 6-2 win.

“I grew up with these girls who are beating them. I went into the stadium for the first time, and she (Radwanska) kind of feels like home there, because she’s been there a lot more than I have,” said Tomljanovic.

“I went out there and inside I really thought I could win. I think that showed and it is why I won.”

Radwanska’s defeat was another boost for 2012 champion and last year’s runner-up Sharapova, who beat Argentine Paula Ormaechea 6-0 6-0 in less than in an hour on court Philippe Chatrier after rain briefly interrupted the match during the first game when the Russian had to save three break points.

“The first game was a little bit tough, I felt a bit nervous at the beginning but I felt really good throughout, especially at the end,” Sharapova said.

Tomljanovic was joined in the fourth round by former finalist Samantha Stosur of Australia, who beat Slovakian ninth seed Dominika Cibulkova 6-4 6-4.

Spain’s Garbine Muguruza, who knocked out Serena, backed up her achievement with a 6-2 6-4 victory over Anna Schmiedlova, the Slovak who eliminated Williams’s sister Venus.

Eighth seed Angelique Kerber of Germany advanced into the fourth round with a 7-5 6-3 defeat of Slovakian 31st seed Daniela Hantuchova.