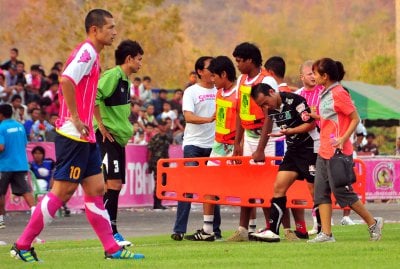 PHUKET: Despite determination for a strong finish and a surprise substitution late in the game, FC Phuket were no match for the Chainat FC “Hornbills” in the two sides’ final game of the season.

The Southern Sea Kirin went down 3-0 on Saturday afternoon in Chainat.

Two of Chainat’s goals came in the first half, from an 18th minute goal by Suradet Saotaisong, with the home team’s lead reinforced by Narongchai Wachiraban’s strike on 38 minutes.

The game was sealed with a third and final strike by Phuwadon Suwannachat, who scored his 21st goal of the season on 65 minutes.

Not long after the final goal of the match, Chainat’s Pitak Noikwa was ejected from the game after flagrantly kicking Sarach Yooyen to the ground, giving Phuket a one-man advantage.

And if that weren’t a lesson to the home side, moments later Chainat would be forced to play the last 20 minutes with only nine players following the match’s and team’s second red card.

Though a hot-headed Narongchai tried to argue against the ruling, the instant replay shown on the live broadcast provided clear reason for anybody watching to side with the referee’s decision.

Too bad there was no instant replay at the game for everyone to see, as that could have saved face for all, and particularly Narongchai’s time-burning objections, which wasted some two minutes of play before he finally reluctantly wai‘ed the crowd and left the pitch.

Despite the overwhelming score deficit, the few Phuket fans in attendance and those watching the live broadcast at the Hulk’s fan club bar behind Surakul Stadium were ecstatic with Phuket’s substitution in the 80th minute.

Following a nine-month absence due to an injury, Thawin Butsombat came off the bench to replace a tiring Sarach Yooyen.

Though clearly agile and in full athletic form, Thawin managed little more than a few offside calls in his brief finale.

Even with their two-man advantage, Phuket was not able to penetrate Chainat’s well-coordinated defenses, despite making several attempts at goal.

However, it looked like the home team would increase their lead in the second minute of extra time.

Phuket’s Kittithat Kraithong fouled Phuwadon Suwannachat in the penalty box and an elated Phuwadon looked like he would be awarded the league’s sole golden boot honors.

However, his spot kick was blocked by Phuket boy Luechar Juntawon. The block was enough to allow Phuket fans to end the game and season with some grace.

Chainat finished the season in second place, and thus have been promoted to the Sponsor Thai Premier League, while Phuket will have to be content in mid-table 9th place with 45 points from34 matches – 11 wins, 13 draws and 11 losses.

Acting coach and senior player Suphat “James” Aonthong said, “We have to accept that our players weren’t as strong as Chainat’s because we didn’t have much training before the game.”

The club’s director Soranan Sanae echoed James’ comments, adding, “[I] accept that we were not as good as Chainat, but I promise that FC Phuket will return in resounding form next season. I hope the fans continue to follow and cheer for us.”

The 2012 season is set to begin on March 14, and an announcement of the season’s complete player lineup is expected to be made within the next two weeks, while training and preparation is set to start in early February.

For more information, pictures and other developments and news in the Thai football leagues, get a copy of the Phuket Gazette out next Friday.