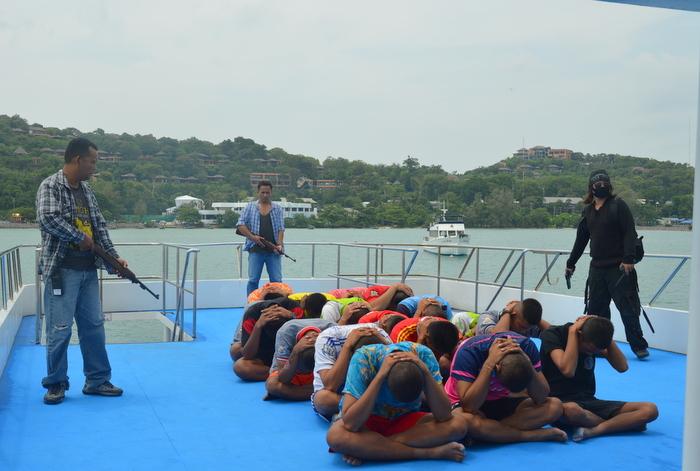 PHUKET: Rappelling from helicopters and swiftly moving across the deck of a tour boat captured by terrorists, Royal Thai Navy specialists were able to neutralize the gunmen and free their hostages.

After all the hostages were accounted for, terrorists and soldiers alike lit up cigarettes and chatted casually.

The hostage crisis was just one situation practiced by government responders and emergency personnel this week during the Crisis Management Exercise 2016 (CMEX 16).

The annual nationwide drill was first held in 2007.

Between June 30 and July 5, emergency personnel simulated crises and carried out response plans on Cape Panwa and near Phuket International Airport.

The exercises allow emergency crews to train for potential responses and fine-tune their crises management planning, Deputy Prime Minister Prawit Wongsuwan said in an official statement from Bangkok. The drills also afford the military an opportunity to showcase their strength and flex the armed forces’ muscles.

Responders in Phuket drilled for emergency situations, including the hijacking of a yacht off Panwa and a plane at Phuket airport. Crisis response personnel also trained to board and search illegal fishing boats, suppress the smuggling of illegal workers into the country and in deep sea rescue tactics.