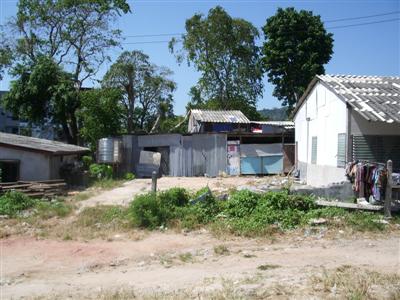 PHUKET TOWN: Wichit Municipality is seeking donations to help build a new house for a family of squatters who are holding up completion of a new road running behind Darasamuth School.

Wichit Mayor Kreetar Saetan told the Gazette the municipality currently lacks the funds to build a new home for Chamnan Rungklin and his family, even though they already have a nearby plot of land earmarked for the project.

When he settled in the area over 20 years ago, Mr Chamnan signed a contract with Muang District Office agreeing to vacate the land without complaint if it were ever needed for the public good.

But now that the time has come, he and his family have no place to go and their continued presence near the school’s back parking lot is holding up completion of a 550-meter road that would allow direct access to the school from the bypass road.

Mayor Kreetar said Wichit Municipality is now accepting donations to help to build a new home for the family.

“We have requested a budget, but the approval process will take time and we would like to begin work right away. We would appreciate donations of concrete blocks and other building materials so we can get started,” he said.

The new house would be built on another plot of Wichit Municipality land just 20 meters away from the existing home. This would allow the family to remain in the same neighborhood, which is located off Ekwahnit Rd behind Surakul Stadium.

“The municipality found a site in the same area that is currently being used as a tool shed and storage area. The owner just stores his things there and doesn’t live in the area, so we negotiated with him to move his things out,” Mayor Kreetar said.

Kumron Lilern, a civil engineer with the Wichit Municipality construction division, said the town plans to build two small houses for the family on the 100-square-meter plot at a cost of about 200,000 baht. Each will comprise one main room and a bathroom, large enough for all five family members, he said.

Mr Chamnan, speaking from Bangkok where he is currently on vacation, told the Gazette he hadn’t spoken to municipal officials since December.

“If they can build a new house for me in a way that doesn’t create problems with other people, then I will have no problems with it,” he said.

“But they should consider that I have a van too and I will need a place to park it,” he said.

Anyone wishing to donate money to help fund construction can contact Wichit Municipality at 076-525100.