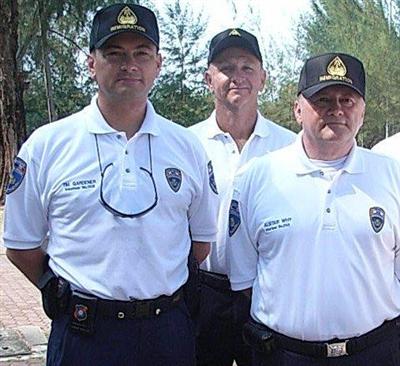 PHUKET TOWN: Police are investigating whether an Immigration Police Volunteer found dead in his Rawai home committed suicide or was murdered.

American national Richard Johnson, 67, was found slumped against his bedroom door with electrical cord around his neck yesterday evening. There were wounds to his neck and forehead.

The death was discovered by an unidentified friend of the deceased, also a foreigner, who went to the home out of concern after Mr Johnson called him to say ‘goodbye’.

When he arrived at the home, the friend found Mr Johnson dead and notified police.

There were no signs of struggle in the house, located on Soi Khok Makham in Rawai.

In the room police found Mr Johnson’s passport as well as a card identifying him as a Tourist Police volunteer.

What is puzzling investigators are the mechanics of Mr Johnson’s death.

The white cord around his neck was not attached to anything, leading them to wonder whether the American asphyxiated himself by tying the cable round his neck and pulling both ends.

While police believe suicide is the most likely scenario, they have yet to rule out murder.

Further investigation has revealed that Mr Johnson had been doing business in Phuket for several years.

He lived alone in the home, having separated from a Thai wife who since remarried.

Fellow Phuket Immigration Police Volunteer Tim Gardener said, “Richard was a friendly chap with a story to match all occasions. He will be missed.”

“He would amaze listeners with his stories of his varied careers – from US Navy Seal, Karate Instructor to Hollywood stars, bodyguard to Presidents, working for Hawaii Police and Fire Departments and captaincy of various ships around the world as a senior mariner.”

Police are hoping the results of that work will show whether they can close the book on the case – or begin the hunt for a murderer.