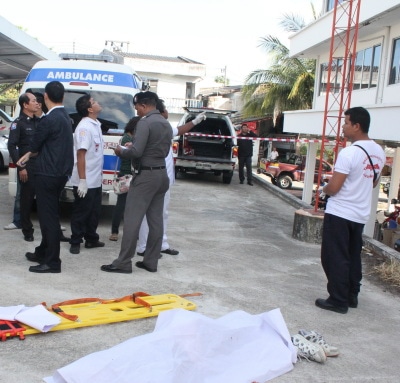 PHUKET: A financially destitute 64-year-old British national took a plunge from a radio mast at the Phuket Tourist Police Station in Phuket Town this morning.

Tourist Police Sgt Maj Phayong Tipsombat, who was on duty at the station, told the Phuket Gazette that about 7:15am he heard shouting from the back of the police station and went to investigate. On discovering someone climbing the radio mast he contacted the Kusoldham rescue foundation and relevant departments, requesting an air-cushion.

“We were trying to convince the man to climb back down, but 10 minutes later he jumped off the radio tower to his death,” he explained.

Sgt Maj Phayong said that the man had been picked up from a Patong hotel on October 29 after failing to pay rent amounting to over 10,000 baht. He was being held at the police station while the British Honorary Consul Martin Carpenter liaised with the UK Embassy to arrange his flight home.

“At 5am this morning, he asked for a glass of water then went back to his accommodation at the back of the station. We had no idea that anything was out of the ordinary,” said Sgt Maj Phayong.

Tourist Police Division 5 Superintendent Yotsavee Pornperaparn told the Phuket Gazette, “Since we picked him up we’ve taken good care of him. We provided accommodation, food and contacted relevant departments to help him fly back home – he wanted to go back home.”

“He had a one month tourist visa which expires November 5,” Col Yotsavee added.

The identity of the man is known by the Phuket Gazette, but is being withheld until next of kin are notified.

The man’s body was transferred to Vachira Phuket Hospital.

Islanders appeal to Phuket Governor over “Rape of Racha’ inaction