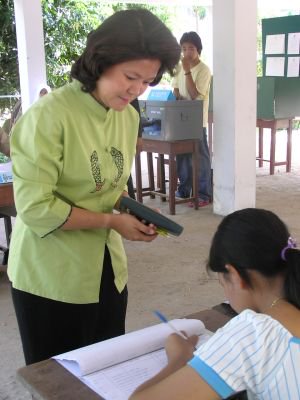 PHUKET TOWN: The ruling Thai Rak Thai (TRT) party’s attempt to become a force in provincial politics in Phuket received a stinging setback in yesterday’s elections for the presidency of the Provincial Administration Organization (OrBorJor), with the TRT candidate coming last by a long way. The winner, after vote-counting ended at about 4 am today, was Democrat candidate and former member of parliament Anchalee Vanich-Thepabutr, who polled 59,639 votes, followed by independents Wisut Santikul (34,505 votes) and Soratham Jinda (11,106), and TRT candidate Pol Col Apirak Hongtong (4,977). The Democrats also managed to get 19 of their 20 OrBorJor member candidates elected, giving them an overwhelming majority in the 24-seat council. “I’d like to thank all those people who voted for us,” K. Anchalee told the Gazette. “They trusted us, so we will do our best to develop Phuket along the lines we explained [in the election campaign].” She said, “I’ve heard that someone filed a complaint with the Provincial Election Commission (PEC) that I gave calendars to people. The PEC will consider if there’s anything wrong but we are confident we have done nothing to break the regulations.” Wisut Santikul, the leader of the recently-formed independent OrBorJor Gao Mai – Khon Baan Rao (New Step – Our People) party told the Gazette that he believed he had lost because of the recent steeply rising popularity of the Democrats in Phuket. “Another reason is that people got the mistaken impression that I was somehow representing the TRT, even though I kept telling them I was not,” he said. At least one candidate was not beyond using dirty tricks, he noted. “One day before the election a leaflet was circulated, accusing me of raping a 13-year-old student. The leaflets were distributed everywhere, even to my home.” Though K. Wisut failed to get elected, two of the 20 candidates his party fielded made it into the council. He added that he will be watching the new administration closely, and has no plans to withdraw from politics any time soon. The TRT candidate, Col Apirak, asked to comment on his performance, declined to do so, saying that he would wait until after the results have been officially verified. “Until the results have been approved, nobody can draw any conclusions,” he said. Phuket Election Commission (PEC) President Dr Prapa Kayee told the Gazette that the PEC has received some complaints about OrBorJor Presidency candidates but none, so far, about member candidates. She declined to give further details. The OrBorJor election center announced that 114,322 people voted out of an electorate of 181,806 – a turnout of 63%. There were 4,095 spoiled ballot sheets.

Piglet deaths “not from bird ‘flu’

Dugong not out of the woods yet