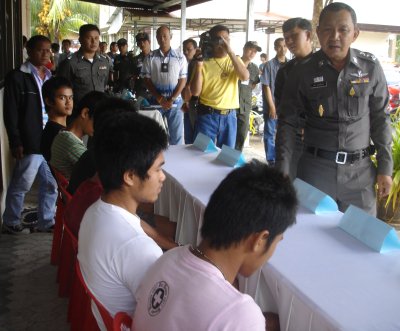 TUNG TONG: Police have arrested a gang of six youths who last week forced their way into two homes in Kathu, where they stole cash and valuables and gang-raped one female occupant at knifepoint.

The first attack occurred just before midnight on Friday at a student lodging near Prince of Songkla University’s Phuket campus in Kathu.

During questioning, New told police that Fear, X, Rak and M, armed with guns and knives, threatened a student to hand over goods with a reported value of 73,650 baht. Sixteen stolen items, all later recovered, included a mobile phone, notebook computer and gold chain.

Gang leader New did not take part in the robbery, nor did the minor.

In the second attack, about 9:30 pm the following day in Kathu Village 1, Fear, Rak and M raped a 23-year-old student while the others stole goods with a reported value of 45,260 baht, the press release said.

An investigation by Tung Tong Police led to the arrest of gang leader New in a wooden sala outside Chalermprakiet School, near Saphan Hin.

After questioning New, police arrested the other gang members. Fear, Rak and X were arrested at the 99 Hotel on Kra Rd in Phuket City. M was arrested at his rented abode on Luang Por Chaem Rd in Chalong.

In relation to the first attack, Fear, X, Rak and M were charged with armed robbery and using a vehicle to escape.

In relation to the second attack, each gang member was charged with his part in the rape, but alll were charged with armed robbery and using a vehicle to escape.

All six confessed to all charges, said the police press release, and are now being held at Tung Tong police station as the investigation continues.