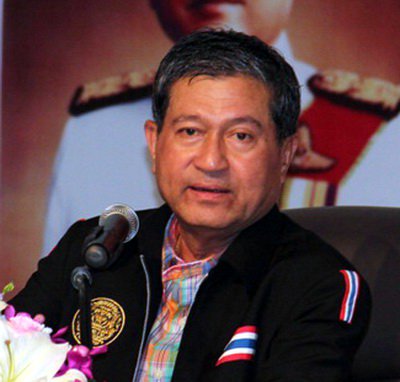 PHUKET: Deputy Prime Minister Chalerm Yoobamrung told top regional police officers yesterday that strict enforcement of closing times at bar and pubs was not the top priority in tourist destinations such as Phuket because visitors come here to enjoy the natural scenery, not the nightlife.

He ordered 264 top-ranking officers, from provincial commanders down to district deputy superintendents, to crack down on drug dealing in their areas and adopt a unified approach to the problem of drug smuggling.

He assured all present that serious investigations were underway into the recent revelation that pseudo-ephedrine pills, possibly numbering in the millions, have been smuggled from state hospitals for use in the manufacture of ya bah (methamphetamine) and ya ice (crystal methamphetamine).

The theft of pseudo-ephedrine, sold in popular cold relief preparations under well-known trade names such as Actifed, came to light just as Cabinet was planning to leave the capital for its mobile cabinet visit to Phuket.

The investigation is now being transferred to the Justice Ministry’s Department of Special Investigations (DSI), he said.

“Drug suppression cannot be accomplished by any single organization. We must all work together, including police intelligence agencies, to stop the flow of precursor drugs into Thailand from across our borders with neighboring countries,” he said.

DPM Chalerm, who is in charge of the Thai government’s latest “War on Drugs”, told officers that any successful approach to narcotics suppression must involve the rehabilitation of addicts and unbiased treatment of anyone involved in the trade, regardless of social status, in order to win public trust.

The Government’s commitment to the drug suppression effort is starting to pay dividends, with an observed reduction in trade along well-known smuggling routes in the northeast region, he said.

“However, smugglers have started changing their smuggling routes into the Kingdom. We know where they are, but cannot reveal that at this time,” he said, while asking the officers to keep up their efforts in drug suppression.

DPM Chalerm also asked the officers present not to focus their efforts on arresting users and small-time dealers as a way of racking up impressive statistics, but rather to gain access to drug kingpins.

Drug users should be put into rehab, while drug kingpins should face the full severity of the law, he said.

Speaking after the arrest of a pair of recidivist drug dealers in Bangkok over the weekend, he said he “would propose an amendment requiring drug dealers sentenced to death to be executed within 30 days of their final verdict, as drug trafficking was a serious issue and many inmates continued to deal drugs in jail.”

DPM Chalerm told the officers that he understood drug abuse was spreading in many parts of the upper South.

He encouraged police to work together with nightlife venue operators to deal with drug suppression issues, rather than focus too strictly on closing times.

In provinces such as Phuket that are popular tourist destinations, closing times could be enforced as appropriate to the area, he said.

“Tourists come to Thailand for the beautiful scenery. Nightlife is not their priority,” he said.