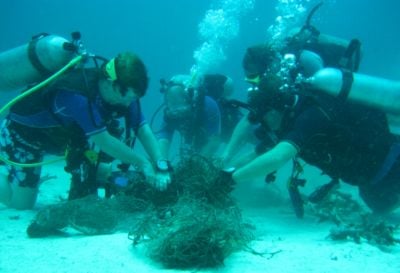 Paitoon Praechaiyaphum of the Marine and Coastal Resources Department Region 5 office, who has visited the site, said that officials were mounting a clean-up operation but that some of the coral reef had begun to turn white and die.

Divers who surveyed the site found 10 sacks of cement in the water, as well as cement powder and stones covering the reef, he said.

Mr Paitoon said the barge operator was using the craft to store building materials for construction projects in Siam Bay.

A large wave hit the barge, causing it to list and allowing water to soak the sacks of cement, he added.

Fearing the barge would sink, the crew on board used a backhoe to scoop up 30 sacks of cement and drop them into the sea over the reef, making it easier to pump the water out of the hull.

After visiting the site, researcher Lalida Patchim of the Phuket Marine Biological Center (PMBC) said an initial inspection of the area showed that there were bags of cement around the reef.

Much of the cement had already hardened inside the bags and did not cause serious harm to the reef, though there was some blanching of coral as a result of exposure to cement powder, she said.

A quick clean-up operation would minimize the damage, she said.

The owner of the barge is co-operating with officials, understanding the need for a quick clean-up.

The Times: realistic or romantic about Phuket?