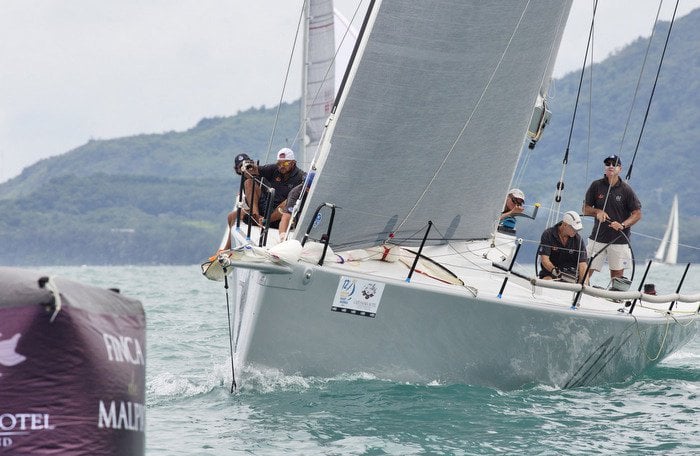 PHUKET: The Race Management team had a busy few hours looking for wind on day one of the 2015 Cape Panwa Hotel Phuket Raceweek. Motoring around the southeast coast of Phuket, Simon James and his team had to postpone the start as they tracked down the breeze. Despite the storm clouds over the island’s south, the rains held off and racing got underway in seven knots with windward/leewards for all classes.

The two TP52s of Oi! (AUS) and Kodo (AUS) were first off in IRC Racing I. Match racing their way to the top mark it was Oi! who rounded ahead of the ex-Team Origin. After two laps, Oi! crossed the finish line and dropped their sails only to realize they still had one more lap to go so re-set the sails, rounded the leeward mark again and went on to complete the three lap course, finishing five minutes ahead of Kodo on-the-water and eight minutes on corrected time.

No such drama in IRC Racing II as Fujin (AUS), with Steve McConaghy on board calling tactics, lead the class off the start. By the top mark, however, Jessandra II (AUS) had reigned them in and rounded first. The ex-Katsu, Foo 4 (USA), started to find their speed on the second lap and past Jessandra II to take line honors. However, finishing just three minutes behind was enough for Jessandra II was they claimed the handicap win and continued where they left off from Samui seven weeks ago.

With a number of Hong Kong sailors on board, including former Commodore of the Royal Hong Kong Yacht Club Warwick Downes, Ruby Tuesday (NZL) started to gel too late in the day and had to settle for fourth, behind the fast finishing Farr 30 Judy (GBR).

The mutihulls are out in force at Phuket Raceweek with 15 on the start line, split into three classes, and for many it was deja vu following the Multihull Solutions Regatta Phuket which finished just last weekend.

In Multihull Racing, WOW left the rest of the class standing at the start and sailed out a quick lead on the upwind leg, only to loose places on the fleet from then on. Firstly Asia Catamarans Hurricane past and then Java, and that’s how the final placings stood.

It was a game of snakes and ladders in the one-design Firefly 850 class as Dyer Straits and Voodoo got the best starts but by the top mark had lost their early lead. Some good tactics and impressive sailing saw a close battle between Twin Sharks and Advanced Racing Mamba, who despite starting on the second row both lead during the race. However, it was Twin Sharks who crossed the finish first and a storming last downwind leg by Blue Noze saw them take second and nudge Advanced Racing Mamba into third.

Four new Corsair Pulse 600s make up the Corsair class and after a clean start it quickly became a two-horse race between SuDu 1 and SuDu 3. Launched just two weeks ago, these small trimarans showed their pedigree with outperforming some of the Firefly 850’s on the same course and in the same conditions. With a DNF for SuDu 2, less than six minutes separated the other three on-the-water and it was SuDu 3 who claimed the handicap win from SuDu 1 and SuDu 4 respectively.

The Cruising and Charter/Bareboat classes started together and in the Cruising class eyes were on the all-female crew on Sailescapes Fargo Ladies who were racing sistership Krabi Boat Lagoon Piccolo – both Farr 1140’s. Krabi Boat Lagoon Piccolo got the best start and tacked off to the right side of the course while Sailescapes Fargo Ladies headed to the left. Sansiri Windstar, sailed by an all-Thai crew lead by Patinyakorn Buranrom, got a slow start and were playing catch-up throughout.

By the bottom mark, Krabi Boat Lagoon Piccolo rounded first and had extended their lead on-the-water over Sailescapes Fargo Ladies. On the final upwind leg Sansiri Windstar were making up ground and over the remainder of the course sailed themselves into second place, a little over one minute behind Krabi Boat Lagoon Piccolo on corrected time, who claimed the handicap win. The all-ladies team placed third.

The light breeze proved too much for the Charter/Bareboat class with only one, Venture, actually completing the course within the time limit. A DNF for Phailin and DNS for Uhuru, who experienced mechanical problems pre-race, saw the class down to three, and both Kantus’ Bride and Fei Yu were awarded FPA.

As the winds died, Race Management were forced to call it a day with one race on the scoreboard for all classes.