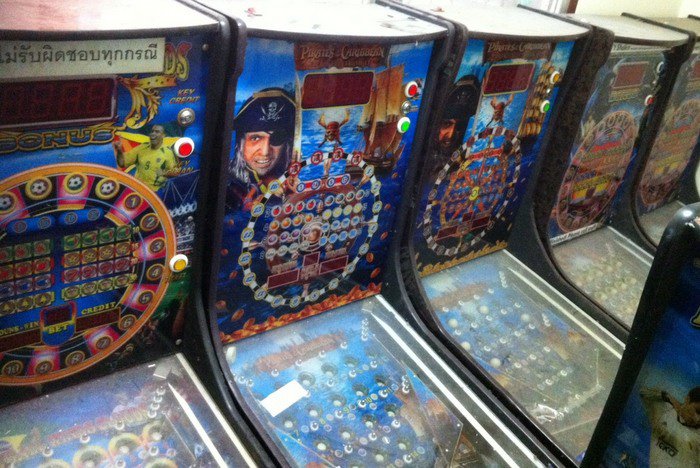 PHUKET: Gambling, in all its forms, is illegal in Thailand. But despite the fact that it has been outlawed for several decades, it is still a popular ‘recreation’ for many Thais.

Underground gambling dens throughout the country do very well, and casinos, located in towns like Poipet, just over the Cambodian border, are mainly Thai owned and often packed with Thai gamblers.

The history of gambling in Thailand goes back a long way. Before it was outlawed, gambling was a popular pastime, growing especially rapidly during the late 19th century. It was spurred by Chinese immigration, a growing economy and the adoption of paper money.

According to a book by James A. Warren, gambling was popular amongst all Thais, from princes to slaves, Chinese merchants to workers, and government officials to farmers, monks and children. In fact, gambling dens frequented by Chinese immigrants were an important source of revenue for the government during the reign of King Rama V, representing around one-fifth of total government revenue collected from ‘tax farms’ during the 1860s.

During the reign of King Rama V, tax farms were the most efficient means by which the government could collect tax. The government would allow several wealthy merchants or businessmen to bid for such a franchise, which was an area or district with enough business activity to generate revenue for the national tax coffers.

If a merchant won the bid, he would have to pay the government the agreed sum for the exclusive right to raise tax within that district or area. The ‘tax farmers’ were almost invariably rich Chinese businessmen. Their gambling dens contributed significantly to the revenue collected from the jurisdiction.

Through this complex relationship, gambling activities continued to feed government revenues for many years.

Official attitudes toward gambling were equally complex, contradictory and ever-changing over time.

Not only was gambling an important source of revenue for the government, it was also a sensitive issue in maintaining peaceful relations with the massive and growing Chinese immigrant communities.

On the other hand, gambling was seen as a vice that was starkly against Buddhist teachings. There is a popular saying among Thais that when a man’s house catches fire, he loses the house but the land remains his property. However, when a man is addicted to gambling, he loses his house and his land.

Many Thais viewed gambling addiction as a threat to a strong society.

Gambling dens were also seen as uncivilized by western powers that threatened Siam’s independence. King Rama V wanted to promote the concept that Siam was a civilized nation, worthy of respect equal to that of its European counterparts, particularly at a time when there was a disturbing perceived connection between gambling and crime.

King Rama V and the princes who advised him knew well the evils of gambling. But as with many of the King’s previous reforms, such as the abolition of slavery and the feudal system, the King understood that the state had to outlaw gambling gradually, over a number of years in order to avoid stirring up social unrest.

Toward the end of the 19th century, the Siamese government increased its control over all forms of legal gambling in Siam, and the numbers of farms and gambling dens were reduced. Throughout Bangkok and the provinces, many gambling dens were ordered shut.

The idea was that if there were fewer gambling dens, the tax farmers would have to bid higher and more competitively for the exclusive right to raise tax revenue. This would translate to higher government revenue.

Licensed gambling was divided into three classes. Class 1 covered games that involved large gatherings of people, such as cockfighting. These were only licensed to certain venues. Class 2 comprised fairground games, such as target shooting, raffles and throwing hoops to win prizes. These required a permit and could be played only during festivals and special occasions.

Class 3 games could be played at anytime once a permit had been granted. These included cards, dice and board games. In keeping with local traditions, many of these games could even be played without a license during Chinese New Year and Songkran, the Thai New Year.

In keeping with the image of a civilized country, King Rama VI allowed passage of a ban on virtually all forms of gambling, including the ‘huai’ lottery first established in 1835.

Gambling, however, did not cease after 1916. Corruption on the part of police and other government officials, as well as social attitudes toward gambling, ensured that illegal gambling remained prevalent and widespread, just as it is today.

James Warren argued that revenue from gambling might even have helped build the modern Siamese nation during the reign of King Rama V.

During the late 19th century, Siam was subjected to several unfair treaties. The Bowring Treaty of 1855,for example, forced Siam to remove barriers to trade with Britain.Tariffs and trade monopolies, a traditional form of revenue for the government, were abolished.

With its independence under constant threat from European powers, Siam had little choice but to rely on other sources of revenue, such as tax from gambling. State spending on modernization projects such as the construction of hospitals and railways may have been financed to a significant extent through taxation of gambling activities.

Tank Returns: Phuket’s beloved DJ back on the scene