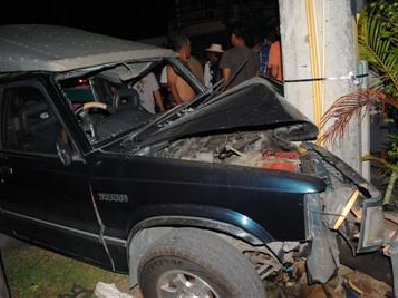 PHUKET: A Canadian couple, killed in a pickup truck bus (songtaew) smash just fifteen minutes into the New Year, were the second and third road accident fatalities in Phuket in the new year.

Both were Canadian nationals of ethnic Chinese descent.

Four others inside the vehicle at the time sustained severe injuries in the crash, which happened on a curved, hilly section of Route 4025 near Bang Tao Shrine.

All six, including the driver, were initially treated at the Vachira Phuket Hospital ICU unit.
Miss Aryporn’s father, Huy Songsak, 82, was badly injured in the smash.

He was riding in the front passenger seat of the Mazda pickup that had been modified to serve as a songtaew, with two rows of seating in the roofed back bed.

The driver, Kwanchai Kanpai, 65, picked up the group at Phuket International Airport and was returning them to their hotel at the time of the crash.

Mr Kwanchai might have been trying to overtake another vehicle when he was forced to veer off to avoid a head-on collision with an oncoming vehicle, Lt Tatchagrit speculated.
The only witness and the only passenger wearing a seatbelt, Mr Huy, has yet to be questioned in detail or informed of the fate of the other passengers, he said.

Police are awaiting the arrival of Mr Huy’s cousin from Canada, who will break the bad news about his daughter and son-in-law, he said.

All he said in the aftermath of the crash was that the driver suddenly swerved right, Lt Tatchagrit said.

Mr Songsak, who speaks Thai, was born in Laos and emigrated to Canada, he added.

After the crash all victims were rushed by Kusoldharm Foundation rescue workers to Thalang Hospital, then transferred to the ICU at Vachira Phuket Hospital in Phuket Town, where Ms Aryporn and Mr Kongseng died before dawn.

The other victims were an ethnic Chinese man with Australian nationality and two Thai men, including the driver.

The deaths were the second and third deaths recorded in Phuket during the Department of Disaster Prevention and Mitigation’s (DDPM’s) current ‘Seven Days of Danger’ road safety campaign that began on December 29.

Yesterday, the fifth day of the campaign, saw the number of road accidents in Phuket climb to 55.

In addition to the three deaths, 63 others suffered injuries requiring admittance to a hospital.

Of these, 25 were recorded in Muang District, with 19 each in Kathu and Thalang districts.

The majority of those injured, 49, were male.

The most common cause of accidents was listed as “poor road surface and/or lighting”, at 32.9 per cent, followed by drunk driving (23.2 per cent).

Nationwide there were 2,473 road accidents killing 234 people and injuring 2,656 more over the first four days of the campaign, according to figures released by the DDPM in Bangkok.