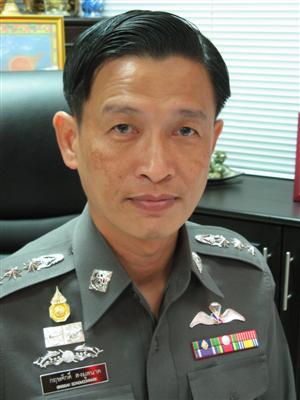 PATONG, PHUKET: A Canadian real estate developer died on his birthday yesterday after he was riddled with bullets by two men on a motorcycle.

At the time of the attack, Francis Alex Degioanni was sitting in his black Toyota outside his seven-story Panorama Condominium block, located in a hillside area off Nanai Rd in South Patong.

Kathu Police officers were alerted to the incident at around 8.30 pm. They hurried to the scene along with doctors from Patong Hospital and rescue workers from the Kusoldharm Foundation.

Medical examination showed Mr Degioanni had seven .38 caliber bullet wounds in his body, four in his arms, one in the head, one in the neck and one in the chest.

Mr Degioanni’s girlfriend, Nanthawadee Phenjaroenwatthana, said that before the incident the two of them were in the condo building waiting to go out to celebrate his birthday.

Mr Degioanni received a telephone call and told her he had to go out for a short while to take care of some business, she said.

When Mr Degioanni got into his car, two men pulled up on a motorbike and opened fire. They then fled, Ms Nanthawadee said.

The attack may have been the result of a business dispute, but police were also investigating other motives including romantic jealousy, he said.

At the time of his death, Mr Degioanni was involved in a court case, having allegedly being cheated out of 20 million baht in a real estate scam, Col Grissak added.

When contacted by the Gazette today, an official at the Canadian Embassy cited legal reasons in declining to give any information about the case.