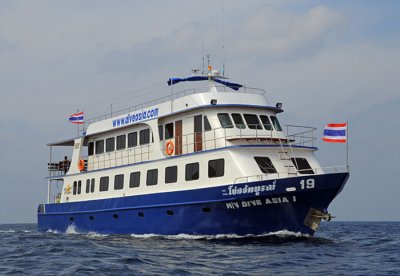 AO MAKHAM, PHUKET: The body of a Caucasian woman was this morning found floating near the site of the sinking of the Choke Somboon 19, which capsized about 12 nautical miles off Phuket on Sunday night.

The identity of the woman has not yet been confirmed. Her body, recovered by a Royal Thai Navy patrol boat, is expected to arrive at the Phuket Deep Sea Port in Ao Makham this afternoon.

The woman was likely among seven people still missing following the accident, which happened at around 11 pm on Sunday.

An emergency meeting was held at Phuket Provincial Hall this morning to discuss the search effort.

The search effort continues and helicopters are on standby to airlift any survivors to hospital, Gov Preecha said.

A Royal Thai Navy officer spokesman said that people in life-jackets can survive for two days at sea without water.

If they have access to water, then three days is not uncommon – though the chances of surviving any longer than that is low, he said.

Meanwhile, Phuket Provincial Police Commander Apirak Hongtong said that police are investigating whether to charge boat captain Chakri Leechuay with negligence for having taken the vessel out to sea when storms were forecast for the area.

The Tourist Police and Immigration Police at Phuket International Airport have pledged to assist survivors who wish to return home but who lost their passports in the accident.