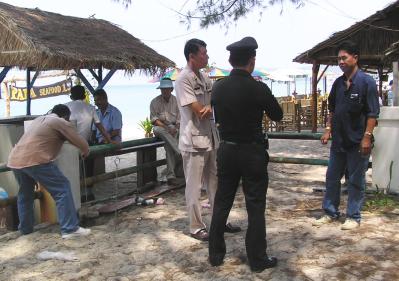 CHERNG TALAY: Around 40 restaurateurs and café owners at Lay Pang Beach will find out soon whether their premises are encroaching on public land. Officials from Thalang District Office and Cherng Talay Tambon Administration Organization (OrBorTor) began a cadastral survey of 17 rai of the Lay Pang area yesterday in order to define boundaries in preparation for taking court action against anyone found to have infringed on state land. “Encroachers will definitely be affected,” said the Chief of Thalang District, Kanthee Silapa, stating that the owners of all illegally-built restaurants would face court action to force them to obey the law. The owners of the Laguna Beach Resort, part of the Laguna complex, are currently fighting a suit that alleges part of the swimming pool area of the hotel is on government land, he noted. According to K. Kanthee, most of the Lay Pang Beach restaurants are owned by local villagers who were generally cooperative and keen to help. “Only a few will lose their businesses,” he predicted. The results of the survey are expected to be completed within a few days, resulting in a map with clearly-defined boundaries.