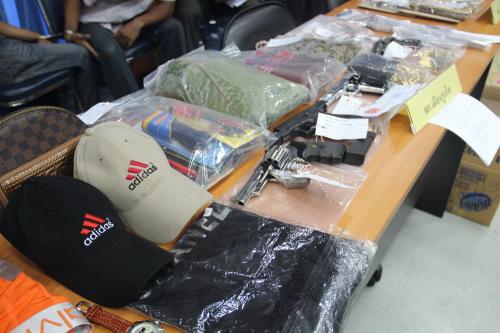 The crackdown, aimed for sweeping results in preparation for the Asian Economic Community (AEC), is targeting everything from immigration issues to prostitution, said Gen Wuthi.

Phuket Immigration Police presented their results to Gen Wuthi, the island’s police superintendents and other top Phuket officers: 77 overstay arrests and 17 illegal workers busted, out of the 1,289 foreigners checked.

Other offices also arrived at the meeting with results ranging from piles of pirated goods and illegal guns, to reports of 44 people being arrested for promoting prostitution and 83 being arrested and fined for operating an illegal taxi.

“I appreciate the work the Phuket law enforcement offices are doing, especially their work with apprehending drug dealers, some of whom have guns, which can create dangerous situations for Thais and foreigners,” Gen Wuthi said. “I see this work, and I see success – so please, keep it up.”

The Royal Thai Police will continue to check on the progress being made throughout the campaign. Samui, Pattaya and Chiang Mai will be handled the same way, he said.

“Our teamwork will improve the image of Phuket and other provinces in Thailand to tourists around the world permanently,” he said. “We want to ensure that we present Phuket to the AEC as an island paradise.”