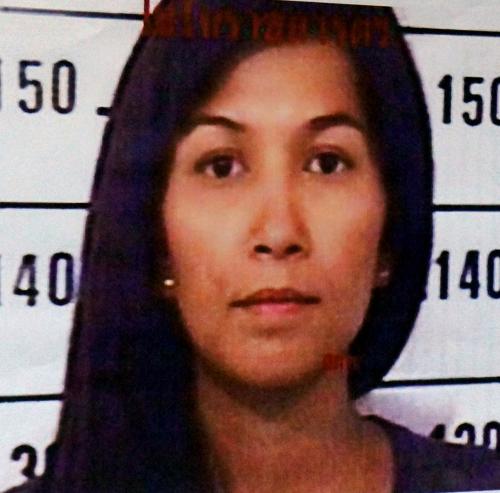 PHUKET: The senior officer in charge of collecting forensic evidence at the home of Norwegian national Stein Harvard Dokset recounted to the court today what his team encountered when they discovered the remains of Mr Dokset’s slain ex-girlfriend, Rungnapa Suktong.

Mr Dokset, 50, stands accused of murdering Ms Rungnapa and leaving her remains to dissolve in an acid-filled trash bin in the basement of his Kata villa (story here).

Mr Dokset appeared at Phuket Provincial Court at 9:40am. He entered the court room with a smile and greeted the lawyers present, including the prosecutors, with a respectful wai.

After the greetings, however, those present settled in for a long wait. Proceedings got underway at 11am with testimony from Lt Col Kittisak Nuphueng of the Phuket Office of Forensic Science.

Col Kittisak explained to the court that Chalong Police called him to inspect Mr Dokset’s luxury six-bedroom villa in Kata at 2pm on February 27, 2012.

His team went to inspect the house the next day at 5pm, coinciding with the raid during which Mr Dokset was arrested.

“In the bathroom of the basement bedroom, we found bones in a bin that was sealed with tape,” Col Kittisak said. “There was still flesh on some of the bones.”

His team also found red spots that looked like blood along the stairway to the second floor and in a bathroom adjoining a bedroom on the third floor.

The samples were sent for forensic examination, he said.

“In a desk drawer inside the home office on the second floor, we found a woman’s shoulder bag containing a loaded 9mm gun. Also inside the bag was a permit for the 9mm handgun issued to Ms Rungnapa,” Col Kittisak said.

“As the senior officer in charge of collecting forensic evidence at the scene, that was the end of my role in the investigation,” Col Kittisak told the court.

The lengthy delay in starting the trial proceedings today drew stern words from one of the judges presiding over the trial.

“This case is taking too long,” he cautioned the prosecutors.

Three witnesses failed to show and a mix-up over who would be providing an English-language translator for Mr Dokset saw the judges waiting more than an hour and a half for today’s proceedings to get underway.

“But three of them failed to show up,” he said.

The two case investigation officers were apparently not available and the ex-girlfriend, named only as “Ms Rungtiwa”, originally from Isaan, simply failed to present herself in court, Mr Suriyatham added.

Col Kittisak himself was scheduled to testify at 9am, but was delayed and arrived at 11am.

Adding to the delays, the prosecutors thought that Mr Dokset’s lawyers were to bring their own translator, but they did not, forcing the court to call for a court translator.

However, instead of waiting further, the court agreed for an English-speaking court officer who volunteered to facilitate proceedings as translator.

The next trial date for witnesses’ testimonies was set for November 8.

In the meantime, Mr Dokset will celebrate his 51st birthday behind bars at Phuket Prison.