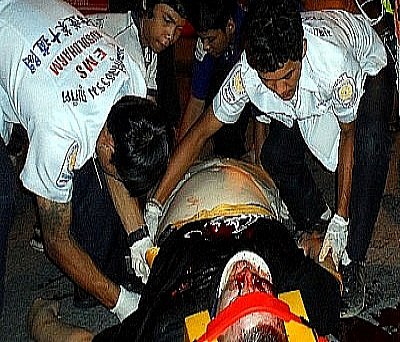 PHUKET: An Australian tourist on holiday in Phuket has been flown to Bangkok to receive treatment after suffering a serious head injury from falling off the back of a tuk-tuk in Patong last night.

Tuk-tuk driver Paiboon Hemwara, 30, told the Phuket Gazette that he picked up Mr Noble and his wife at the top of Soi Bangla at about 9pm.

“We were heading to their hotel. Both of them got into the back, but then her husband climbed out and stood on the back [of the tuk-tuk] and held on to the handles used for getting in and out of the rear cab,” he said.

Police, led by Patong Police Capt Jakkapong Luang-aon, arrived at the scene to find Mr Noble unconscious, lying in the middle of the road, bleeding from the face.

The accident occurred in front of OTOP Plaza on Rat-U-Thit 200 Pi Road, not 800 meters to the south of where the couple entered the tuk-tuk.

Patong Police Deputy Superintendent Kittipong Klaikaew told the Gazette, “We have questioned the wife and the tuk-tuk driver; we are treating the incident as an accident.

“His travel insurance company was notified and Mr Noble was flown to Bangkok today to receive hospital treatment there,” he said.

Col Kittipong said that Mr Noble had yet to regain consciousness when he left Bangkok Hospital Phuket today.

The accident follows recent complaints from tuk-tuk drivers that to be legal under Ministry of Transport regulations, all tuk-tuks must have access to the rear cab from the side of the vehicle – not the rear of the vehicle.

A representative of one tuk-tuk co-operative complained that it was too expensive to modify tuk-tuks that were in operation before the regulation was introduced, citing prices as high as 100,000 baht to modify a tuk-tuk to make it legal.

UPDATE: The Phuket Gazette contacted Lt Col Kittipong to inquire about the facts as stated on the police report of this case. He told the Gazette that Mr Nobel’s wife, the only witness, stated that her husband was inside the cab, not standing at the back. She said he leaned across the back of the cab to see if the air on the opposite side of the compartment would be more comfortable, then accidentally fell out of the vehicle. The driver Mr Paiboon told police he did not witness the accident, but initially presumed he must have been hanging from the back to have fallen from the vehicle. [Date of update: August 9, 2012]