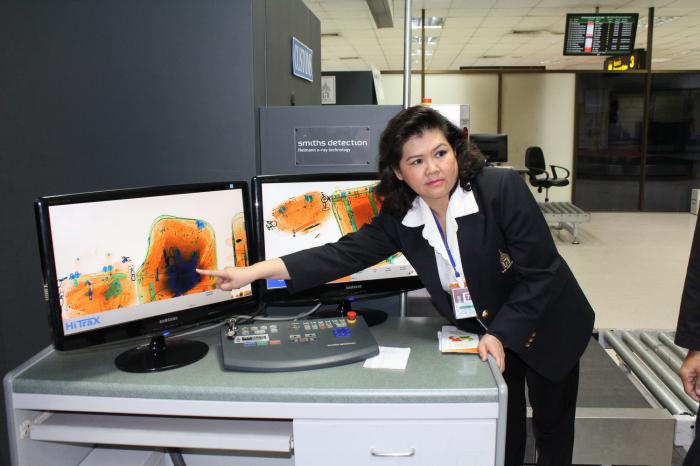 PHUKET: Officers at Phuket International Airport have been asked to target people carrying large amounts of undisclosed cash in the ongoing battle to crack down on transnational crime.

The request comes from Glenn Tankard of the Australian Federal Police (AFP). Mr Tankard was in Phuket early this month in his role as head of the Thai Transnational Crime Coordination Network (TCCN) central office in Bangkok.

“Immigration at the airport should look out for suspicious people, such as those who do not declare that they are carrying US$10,000 or more,” said Mr Tankard.

“Excess, undeclared money is a standard indicator that someone is involved in money laundering, which only arises from other crimes… This is something very small that immigration can pick up that could paint a bigger picture of a possible criminal network.”

The AFP officer explained that his recent four-day visit was to follow up on a joint Thai-Australian initiative targeting transnational crime, for which a meeting of Phuket’s top-ranking police officers was held in Phuket Town in August last year (story here).

“The joint project [TCCN] between the AFP and the Royal Thai Police has been going on for about eight years. The key is the computer database in which Thai police collect and analyze intelligence, especially data about transnational crimes across the borders of Thailand,” Mr Tankard said.

“I came down here [from Bangkok] just to talk to staff who work in the transnational crimes unit, to make sure there are no problems with hardware.

“The system was initially installed at Phuket Provincial Police Station in Phuket Town about six years ago and at Phuket International Airport at the end of last year, so staff at the airport might need more training.”

The database – called the Case Management and Intelligence System (CMIS) – links all TCCN units across the country, allowing them to share intelligence on transnational crime.

“There are about 30 TCCN units throughout Thailand,” Mr Tankard said.

Maj Gen Apichat Suriboonya, head of the National Central Bureau – Interpol Bangkok office, explained to the Gazette that the CMIS also allows officers to crosscheck information about every wanted criminal in the Interpol database, which compiles information from the international crime agency’s 190 member countries.

The system can also identify all passports reported to Interpol as lost or stolen.

“The CMIS is regularly updated with the latest reports from Interpol. All the information is uploaded to our central server in Bangkok, which all TCCN units across the the country can search,” Gen Apichart said.

“It can search passports in the system by name, telephone number or any relevant information about the person. It can also match a face to a name.”

The CMIS is the same database used to verify passports used as collateral to rent cars and motorbikes in Phuket, which rental operators in Patong now submit to Interpol via the smartphone application Line (story here).

However, Mr Tankard said that the Line project was outside his remit. “I am aware of the operation launched by Interpol to check information about lost and stolen passports from all provinces in Thailand, including Phuket, but I believe it is an operation being run solely through Interpol,” he said.

Following the discovery that two passports stolen in Phuket were used to board missing Malaysian Airlines flight MH370, Gen Apichat told the Gazette that he would like to see the CMIS made available at Patong Police Station.

“Many tourists from around the world visit Phuket, and in particular Patong, and many passports are reported as lost or stolen in Patong. That was brought to the world’s attention with the passport that was used for two passengers to board the Malaysian Airlines flight,” he explained.

“Having the CMIS at Patong Police Station can help identify any passports reported as lost or stolen that are being used by other people [other than the genuine holders].”

However, Mr Tankard said he had not been notified of any request to assist in setting up a CMIS access terminal in Patong.

“I understand that having a CMIS in Patong would make it quicker and easier for officers there to check the system. Right now, they have to ask the TCCN at Phuket Provincial Police Station to check for them.

“We are always looking into installing the software at more locations in order to gather more information, including in Phuket and other tourist destinations. However, we have yet to decide when we will set up another transnational crime center in Phuket. We are looking into it.”