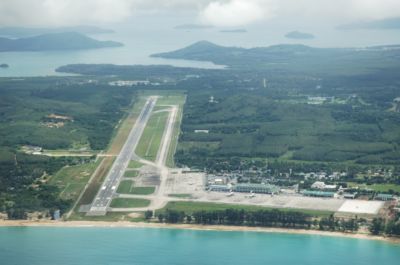 MAI KHAO, PHUKET: Airports of Thailand (AOT) is to make a further reduction in landing fees at the six airports under its control, including Phuket International Airport (PIA).

In a bid to help struggling airlines battered by dire economic conditions and Thailand’s continuing political turmoil, fees will now be reduced by 30%.

Parking fees will also be waived for aircraft spending less than 24 consecutive hours on the tarmac, as earlier reported.

The organization had already reduced landing fees by 20% following the yellow-shirt protests that resulted in the shutdown of Suvarnabhumi and Don Mueang Airports late last year.

Demonstrations and violence by red-shirted protesters in Bangkok, as well as the humiliating cancellation of an Asean summit in Pattaya earlier this month, have forced AOT to act again.

AoT chairman Piyaphan Champasut said the move would cost AOT 450 million baht, but that “AOT has to put Thailand first.”

Meanwhile, Mr Piyaphan announced that AOT would cancel a 500 million-baht contract with Thai Airports Ground Services (Tags) to supply trolleys for use at Suvarnabhumi Airport.

AOT would also fine Tags two billion baht, despite AOT holding a 28.5% share in the firm.

In a seven-year supply and maintenance contract, Tags was to provide over 9,000 trolleys, yet Suvarnabhumi has only around 3,000 trolleys in use now, Mr Piyaphan said.

AOT has attempted to plug the gaps in trolley supply at Suvarnabhumi using trolleys from other airports, including PIA.

The AOT also approved a plan to upgrade PIA. Following the project, the airport will be able to accept 11.5 million passengers per year.

The expansion will mean PIA will have a capacity of 20 flights per hour, or one every three minutes. Space for the parking of private jets will be expanded, while the shops inside the terminal building will be improved.