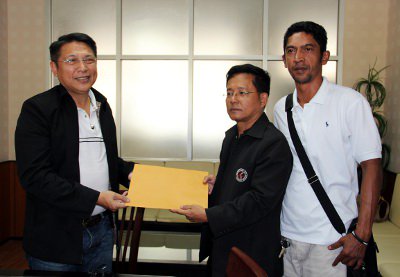 PHUKET: The President of the Phuket Reporters Club, on January 11, filed a formal request for Prime Minister Yingluck Shinawatra to personally appoint the chief police officer who will lead the investigation into the murder of Wisut “Ae Inside” Tangwitthayaporn.

His wife was sitting beside him in the car when the gunman opened fire.

However, Phuket Reporters Club President Peerapong Polpramoon, Club Secretary Watchara Malikaew and a group of Phuket reporters together met Maj Gen Pisan to hand him the formal request for PM Yingluck to appoint the chief investigator.

“During his 20 years as a reporter, he [Mr Wisut] showed he was capable, brave and a man of principle in continually protecting Phuket’s natural environment,” said Mr Peerapong.

“The Phuket Reporters Club urges the police and related officials to bring the perpetrators of this crime to swift justice. This murder threatens the role of the media, and specifically in this case as the person behind it is an influential person,” said Mr Peerapong.

“Therefore we would like to ask Prime Minister Yingluck to order a high-ranking police officer to be in charge of this case. Local police will be unable to solve it because of the level of influence of the person behind it.

“This would be fair for the victim and would help restore the confidence of journalists to be able to continue reporting in line with our professional ethics,” he added.