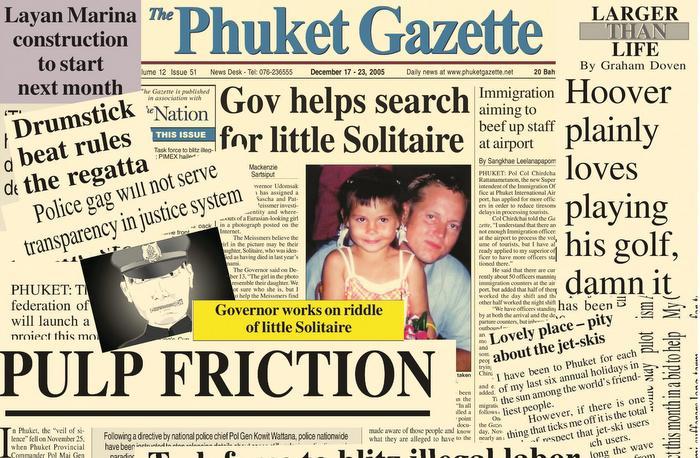 PHUKET: A decade ago on page one, the Phuket Gazette told the story of a renewed spark of hope that filled the souls of Sascha and Patchara Meissmer, as they re-launched the search for their young daughter, Solitaire, who went missing in the 2004 tsunami.

“On December 26, I held onto Solitaire as tightly as I could, but the second wave ripped her out of my arms. A friend later told me he saw my daughter being rescued. I have long sensed that my daughter is still alive somewhere, and when I saw the picture, I felt more sure. We may find her yet,” Mr Meissmer said.

A body with a 99.99% DNA match for Solitaire’s was recovered and identified by the Thai Tsunami Victim Identification (TTVI) unit… evidence that would seem conclusive. However, as 2005 was coming to a close and the anniversary of the great wave quickly approached, a photograph of a Eurasian-looking girl, who appeared strictly similar to Solitaire, was posted online – that was all it took to rekindle hope for the Meissmers.

Countless miracles rose from the rubble and devastation left by the tsunami. For every survivor’s story of great loss, there seemed to be an equally compelling story of extraordinary human kindness, compassion and hope. Was the story of Solitaire yet another?

The TTVI unit and the Phuket governor at the time, both did their best to review the evidence, as well as search the Phuket flight records for any trace of the little girl in the photograph.

Then, in the late spring of 2006, a new and independent DNA analysis was conducted. It confirmed that Solitaire was one of countless children that did not survive the waves – but ten years ago, we didn’t know that, and neither did the Meissmers.

As the Meissmers and government officials searched for Solitaire at the end of 2005, a disconcerting silence had fallen over the island.

Maj Gen Decha Budnampeth, the Phuket provincial commander at the time, had put a gag order in place: officers at all levels, including station superintendents, were to stop releasing case-specific information to the media. The order was a trickle down from the national level.

“The media blackout has been lauded by activists as a long-overdue step to protect the rights of victims and suspects who have yet to be found guilty by the courts, but the press and television are finding it more difficult than ever to do their jobs,” the Gazette reported in the December 17-23, 2005 issue.

Gen Decha blamed inaccurate and unethical reporting by both the media and the police. Like police officers, some members of the press lacked the education or experience to report accurately and without bias, he said.

Reenacting crimes remains a standard carnival-like practice by police looking to parade unconvicted criminals in front of the media. (Who remembers the man who reenacted the sexual assault of a minor, using a teddy bear as he smiled for the cameras?) Despite the government’s stance on unethical reporting, the practice of reenactment was to be considered on a case-by-case basis, only with the permission of the suspect. A similar stance on reenactments was reinstated on Phuket several years ago, but didn’t seem to stick.

Without a doubt, the information leaked to the media, along with unfounded assumptions made by police – the questionable circumstances surrounding a number of deaths ruled as suicides by police should serve as apt examples – would not be permitted in many western countries. The best solution is a police spokesperson, who is briefed on cases that are of public interest and capable of walking the fine line between providing important information to the public, and those appealing to the voyeuristic tendencies that draw so many to the news pages.

Nonetheless, a media blackout, such as was seen ten years ago, raises the hackles on the back of a person’s neck and conjures up the inevitable question: what are they hiding? In all countries though, especially those where distrust of the police runs as high as a person’s temperature when down with dengue, nothing holds more true than the oft-quoted aphorism: “Not only must Justice be done; it must also be seen to be done.”