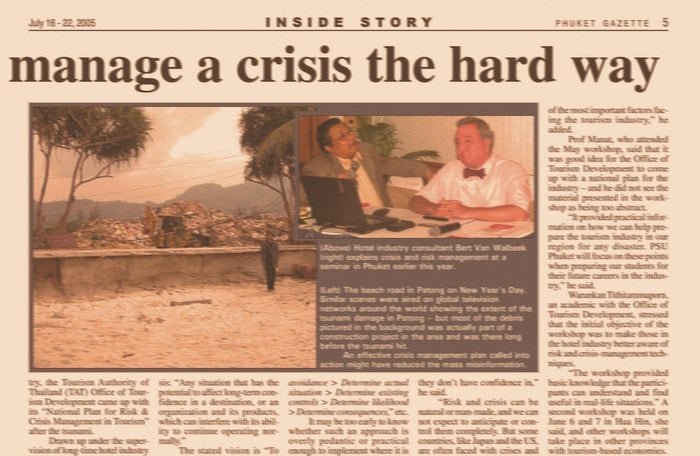 Well, little did the t-shirt producers know that there was plenty more to come.

Phuket seems to be on a steady pace of one international-level crisis a year. So, you’d think that the island and the industries on it would have already mastered crisis-management strategies… clearly, those who read the article have either left the island, or aren’t in a position to act appropriately.

The number of businesses that clam up after a tragedy because they have no protocol for dealing with the media or the public in a worst-case scenario is extraordinary. The old ostrich-head-in-a-hole management system seems to be extensively used, in hopes that the media will give up and the public will forget what happened, such as with the story of two Korean tourists who were killed as a result of the reckless driving of a speedboat ‘captain’… a little reminder of the not-so-distant past.

However, that was just two pages of the Gazette, not even page one, which was scooped by Saphan Hin.

The park scored big a decade ago when it landed a 39-million-baht budget to ‘spruce up’ Phuket Town’s premier recreational area. Though rarely used by the expat community, for whatever reason, the park plays host to a number of extraordinary events including the annual Red Cross Fair and this year’s Southern Criterium and Bike Week, as well as a number of sporting events.

“When completed, the area will serve as a new, beautifully landscaped area for people to enjoy,” the Gazette was told.

Well, for those expats or tourist who are willing to make the trek from the west-coast beaches with a picnic basket for some local vibes, it’s not a bad deal at all.

Oh, the Gazette was packed with other headlines, as well as some questions that are hard to wrap our heads around in today’s online data-driven world, such as: ‘Today, some providers are selling 1MB for 800 baht a month or less’.

Might you be thinking ‘Oversubscribed?’ Clearly the world, and Phuket, have changed a bit in the last ten years.