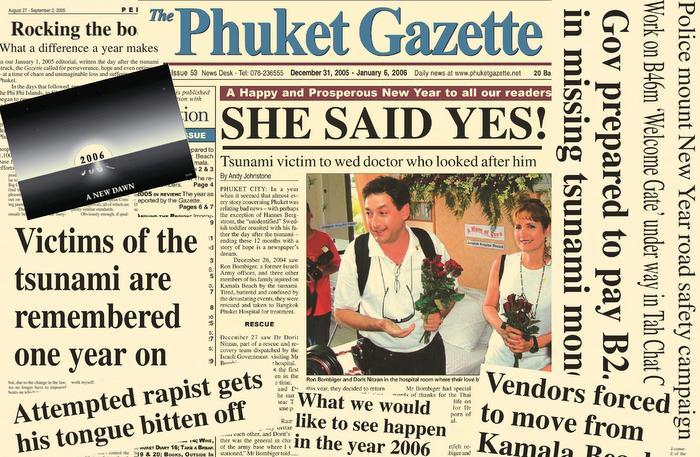 PHUKET: On an island accustomed to horrific, devastating and dumbfoundingly absurd news, the page one lead story that captured the hearts of Phuket Gazette readers a decade ago was one of recovery and love – who says good news can’t sell?

With uncharacteristic typographical enthusiasm (underlined and accompanied by an exclamation mark), the headline in the December 31, 2005 – January 6, 2006 issue of the Gazette read, ‘SHE SAID YES!

Tsunami victim to wed doctor who looked after him’. Though born in the same town in Israel – Ramat Gan – Rom Bombiger didn’t meet Dorit Nitzan until she started helping him recover from the trauma of the tsunami at Bangkok Hospital Phuket – one year later he proposed.

Similar to the issue of the Gazette you’re holding right now, the Dec 31-Jan 6 issue ten years ago paused to reflect on a year past; a year that was fraught with the pains of recovering from the tsunami:

“The news in 2005 was dominated by the tsunami and its aftermath. The main headline in the first edition of the Gazette in January said, ‘Relief effort begins’. Businesses nationwide donated goods and services to the giant waves’ victims, bringing much needed relief. Meanwhile, the arduous task of identifying the dead began… The government pumped 20 million baht into the Tourism Authority of Thailand (TAT) coffers in order to provide assistance to tourists in the six tsunami-affected provinces… Despite the catastrophe, tentative optimism emerged in early January, with bold government claims of being able to set up a disaster warning center by the end of the month – as well as the TAT’s proclamations that it would send teams to Europe, publicizing Phuket’s recovery.”

Though the promise of the warning system being online within a month fell short of reality by several years, the tourism sector did miraculously recover. As explored in this issue of the Gazette, the island’s resilience seems to be second to none. Military rule, travel warnings, threats of possible terrorist attacks, shark bites and other sensational news that would appear to be capable of dealing a crippling blow to the province rolled off its protective bubble like a drop of water on a rain jacket this year.

Surprisingly, in-tune with the future needs of the island, then-Phuket Governor Udomsak Uswarangkura spoke to the Gazette about what he would like to see happen in 2006. He called for the island to better coordinate the many facets of development into a single concept in order to propel the province forward.

“There are many separate and different aspects, such as tourism, health tourism, Phuket’s marinas and the island’s overall development. We need to combine all these concepts and link them so that Phuket becomes a top-class destination and one in which people will invest,” he said.

Though officials are still juggling numerous projects as they continue to deal with the province’s growing pains, this year has seen a unified push – with strong backing from Bangkok – toward a single image of what Phuket will be as we enter the Asean Economic Community. The strong focus in the marine tourism sector is expected to deliver fruits to those that have been patiently tending to it, especially now that the government-backed Thailand Yacht Show prepares to set sail in early 2016.

What the editors of the Gazette will think of our current predicament with 10 years of hindsight, is hard to say. Of course, if we jump into the Gazette‘s ‘The Time Machine’, a backward glance from a decade ago – giving ourselves double-bump back to 2000, we find a headline that seems as if it could have been written any time within the last 20 years: Patong’s allure fades as many problems grow unchecked.

And though the concerns are familiar – parking, road safety, flooding and touts – only a few of those expats that can recall in their mind’s eye images of the rice paddies and wandering water buffalo that once dominated Patong, will be able to truly recall how drastically different the magnitude of problems being tabled at the turn of the millennium were from those we face today.