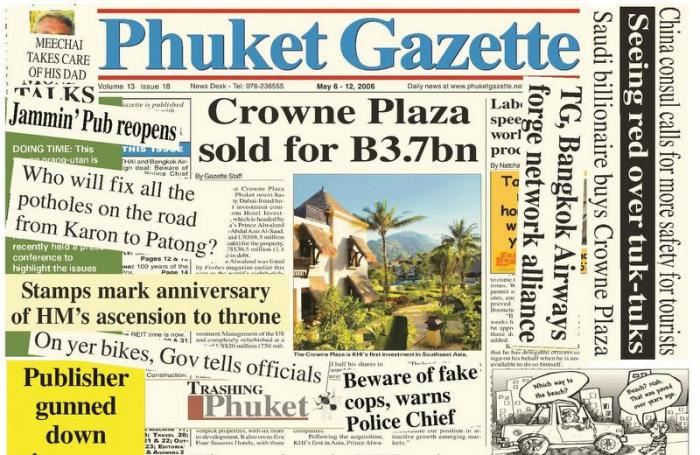 PHUKET: If you weren’t in Phuket ten years ago, you might not even know what the Crown Plaza was.

Nonetheless, it stole page one of the Phuket Gazette in the May 6-11, 2006 issue when it was bought by Kingdom Hotel Investment, which was headed by Saudi Arabian billionaire Prince Alwaleed Bin Talal Bin Abdul Aziz Al-Saud – the 8th richest man in the world at the time.

Originally the Karon Villa Resort, the hotel complex was built in 1984 and then rebranded as the Crowne Plaza in 2003. Despite the unfamiliar name, the property itself is one that many socialites and tourists on the island will recognize, as it is now Movenpick Spa Resort Karon Beach.

Though Prince Alwaleed praised the opportunity to get his hands on a fully refurbished hotel in a pristine site on Phuket’s west coast, the big news for most readers was a little sidebar story on page one: Labor Chief speeds up work permit procedures.

It’s hard to imagine that the sometimes painful process of getting a work permit in Thailand was once even more torturous.

“Now, people do not need to come to our office two or three times. We will have their work permit renewed in just 15 minutes, and new work permits approved in just one week,” said the Phuket Provincial Employment Office (PPEO) chief at the time. Though optimistic time frames for receiving a work permit might not have endured over the last 10 years, as the number of foreigners and migrant labors has continued to rise, the system put in place by the chief definitely has helped with clarity. Instead of details being handwritten into work permits, they are now printed by a computer to make them more legible – to those who can read Thai.

It is not hard to imagine the doors for corruption and confusion that slammed closed with this change – not saying there aren’t other doors still cracked open. Nonetheless, clarity in work permits continues to be an issue in Phuket, especially within the diving industry. This New Year’s Eve, seven dive instructors based in Phuket were arrested and jailed for several days for working in Krabi province, apparently something not covered in their work permits. Unfortunately, the current PPEO chief is dead set against further clarifications inside work permits – shooting down the idea of providing English translations that would allow those who hold them to accurately understand what exactly they are permitted to do when it comes to work.

Worse than a couple of nights in jail for a work permit infraction, however, are underestimating the dangers of a sunny day in a tropical paradise, which prompted lifeguards to queue up ‘please-don’t-ignore-red-flags’ loop tape to warn locals and tourists about the dangers of Phuket’s west coast rip currents, which have already claimed the life of at least one young woman this year.

Ten years ago, the rips and other dangers on the island that killed three Chinese tourists in Phuket between January and May 2006 prompted China’s consul-general in Songkhla to call for help in protecting what has since become the island’s number one source market.

“The Chinese government recognizes that the most important thing for tourism development is safety, and so we urge Chinese tour operators to take very good care of their tourists. We also want the Thai government to help prevent Chinese tourists from getting into unsafe situations,” the consul-general said.

Despite safety being a priority for tourism development, neither the deaths of those three Chinese nationals – two by drowning – nor the dozens who have died in the following ten years seems to have hampered the explosive growth of the Chinese market.

Though Chinese regularly drown on snorkeling trips in our waters, it seems that etiquette has come to the front lines for Chinese-tourism management. In March this year, tour guides working with Chinese and Chinese tour company employees were invited to join an etiquette course. The course came in the wake of a video clip that went viral of Chinese tourists in a disgusting, wasteful feeding frenzy at a prawn buffet in Chiang Mai.

Of course, Thailand isn’t the only country trying to school Chinese tourists: a tourism guide imploring Chinese visitors in Japan to stop belching and passing gas in public has had to be republished in multiple languages – not just Chinese – so as to lay the blame for uncouth behavior on ‘foreign’ tourists generally, rather than guests from China alone.

Given the stink being raised, perhaps other tourists will just have to move or pick a different part of Phuket to explore if they are worried about being swarmed by those arriving by tour buses. May I suggest the Crowne Plaza? There weren’t nearly as many tourists on the island ten years ago – though the dangers in the waters and the roads were just as real.