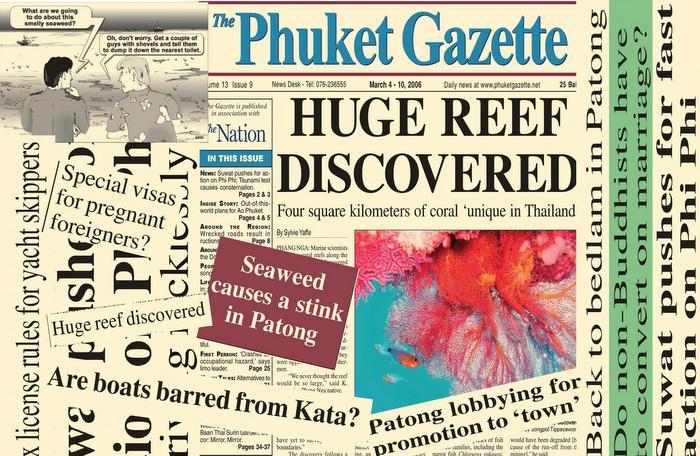 PHUKET: As the Phuket Gazette scuba diving columnist for the last four years, I was dumbfounded when I stumbled over the headline screaming from page one of the 2006 March 4-10 issue: HUGE REEF DISCOVERED.

A unique swath of biodiversity for Thailand that consumed at least four square kilometers of seabed off Tai Muang in Phang Nga was the biggest such reef in the region. The discovery followed a report in January stating that about 50 per cent of reefs inspected along the Andaman coast after the tsunami were destroyed.

“It was great – very big and healthy. It is in good condition and only about one per cent was damaged by the tsunami,” said the head of the Thailand Marine Coastal Conservation Unit at the time. “It is completely different from the [reefs at] the Similans, Surin or Richelieu. It is not sloping and it is home to species never before seen in Thai waters, as well as species [that before were] only seen in the Similans.

Researchers were sure that the reef had the capacity to boost tourism in the region, but only once a good management plan was put in place… Has it taken more than 10 years to establish that plan? What happened to the mysterious reef that was considered ‘both a bombshell and a cause for joy’ by members of the dive industry? Those are perhaps questions for some of the old sea dogs at your local dive.

However, coral reef damage wasn’t the only troublesome legacy of the tsunami detailed in the March 4-10 issue. Though officials declared a test of 12 tsunami warning towers on February 22 a success, residents told the Gazette that they were terrified during the process, as they had received no warning of the trial.

During the test, full emergency messages were broadcast. All this a little more than a year after the horrific waves crushed the coastline. In fact only a few years ago, similar failures to inform tourists and locals of emergency drills led a number of people to panic and this was without recently having witnessed or dealt with the loss of loved ones and friends to the waves.

The warning, broadcast in English, simply said: “Attention please! Attention please! There are tidal waves from storm winds. Please leave the beach as far as possible for higher ground urgently.”

That is, without a doubt, one way to incite panic in a crowd of tourists – those tourists bold enough to be the foundation necessary to promote the regrowth of the industry on the island.

Also causing a stench on the beach was an old friend that even newer expats are familiar with: Cladophora.

The blooming bay, which has taken page one a number of times throughout the years, had signs of ‘high organic content that comes from wastewater, a marine biologist at the Phuket Marine Biological Center explained in 2006. A similar explanation has been printed in the Gazette‘s pages almost annually since.

Though the extraordinary Phang Nga reef and unique ecosystem that was associated with it has become buried in the bowels of history, recalling the stench of unprocessed wastewater crossing popular beaches does not take an elephant’s memory.