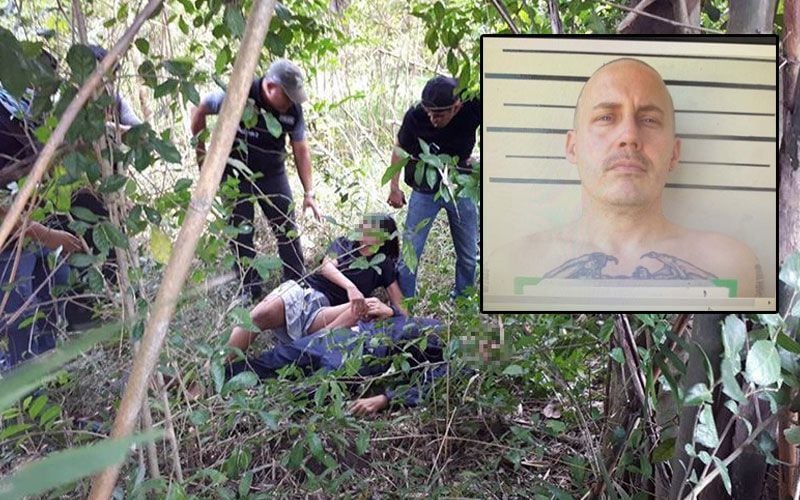 Correction: Earlier report said that the American fugitive shot himself, then his wife. The Thai partner is in police custody but was not shot.

The American fugitive, who shot himself just moments before being arrested by police in Sa Kaeo Province, is dead.

American Bart Allen Helmus had been on the run since Monday after escaping from a Pattaya court where was due to face drugs charges, along with his Thai wife and a third suspect, “Noi” Nilthes. Dramatic footage from the holding cells of the Pattaya Court here…

During their escape Helmus stabbed a court guard and Nilthes used a gun to get the keys to their chains. Their escape sparked a huge manhunt with hundreds of officers across three provinces.

From the beginning police believed the three would head for the Cambodian border. On Tuesday, police closed in on the group after discovering their getaway truck in an industrial park in Sri Racha. A second vehicle getaway car was found in Sa Kaeo Province Tuesday evening.

By midday Wednesday, police had captured Nilthes in Sa Kaeo, after he reportedly contacted family telling them he wanted to surrender. Less than two hours later, police had tracked Helmus and his Thai wife Wiset-rit to Sa Kaeo, on the Cambodian border.

With police surrounding the couple, the American Helmus threatened to kill himself. When police moved in, Helmus shot himself. He died a short time later in hospital.

It has been reported that, at the time of the confrontation, he told police that his wife was three months pregnant and they didn’t want their child to be born in prison.

Police say they did not fire on the suspects during the confrontation.

The three suspects were arrested in Pattaya three months ago with nearly a kilogram of crystal methamphetamine (ice), ketamine, a gun and 200 bullets.